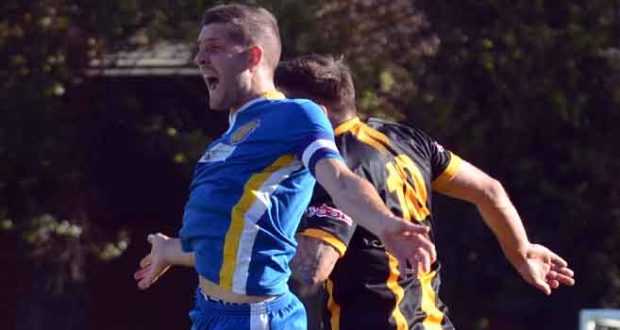 STEPPING UP: Neal Spafford, pictured during his playing days. Photo by JAKE WHITELEY

The former DR Congo international defender will join assistant manager Neal Spafford in the dugout for the Lincolnshire derby in the wake of Lewis Thorogood’s resignation as boss on Monday.

Tulips’ CEO Leigh Porter said: “I’m really grateful to Neal and Gaby for coming in and helping us this week, it’s hugely appreciated.

“While the search for a new manager continues, they are playing a part in the overall process – starting with an important fixture at Cleethorpes.”

Speaking to The Peterborough Telegraph, Zakuani admitted that he has been advising Spalding since his friend Andrew Killingsworth took over the club back in the summer.

The ex-Posh ace said: “I’ve been helping them since a friend of mine, Andrew Killingsworth took over the club.

“I’ve just been helping him on how things are run etc. I’ve not done any coaching yet, just watched videos of last few games and had input about off the pitch affairs.”