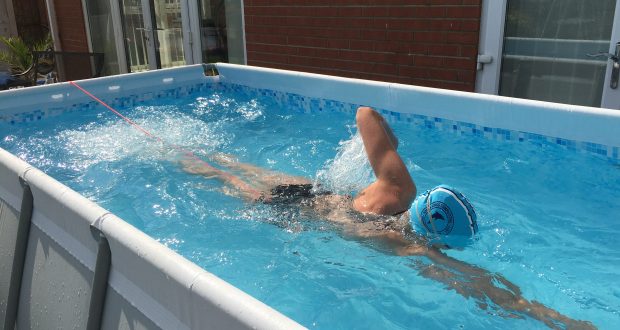 They may be set to be one of the last sports clubs that return to action, but that’s not stopped South Lincolnshire Swimming Club from continuing to train during the lockdown.

Some members have even been able to create mini-pools and fitted them with restraints to continue to train.

That’s just one of a host of creative measures the talented members have been undertaking to ensure the club’s upward trajectory continues.

While the relaxing of lockdown has provided opportunities for open water swimming the club have also been hosting online land training sessions which works on core muscles needed for a swimmer to increase their mobility, stability, strength and prevent injury.

The lockdown came at a disappointing time for the club and on the back of a hugely successful county championships which brought 107 medals over the course of the three weekends comprised of 31 gold, 30 silver and 46 bronze medals.

It meant even more qualifiers for the Regional Championships but sadly for the club, particularly first time qualifiers Frank Lamb, Erin Siggee and Lucas Garlike, it’s been cancelled.

There was disappointment too for 14-year-old Emma Croker who had qualified for the British Swmming Championships and Olympic Trials that were due to be in April.

Emma had hoped to land a place to represent Great Britain at the European Junior Championships after qualifying to compete with the country’s best in both the 50m freestyle and 50m butterfly and follows on from her successes at the British Summer Championships in Glasgow last year.

Closer to the home the club’s annual Tulip Swimming Meet due to take place in May was cancelled and entry money refunded.

The club’s secretary Janet Croker said: “This is the club’s main fundraiser and helps to keep the club financially viable and helps pay towards coaches wages, training of volunteers, equipment and expenses.

“We are lucky that we have several volunteer coaches.

“This had to be cancelled and all swimmers’ entry money refunded.

“The Spalding Beer Festival, normally held around May at the Castle Sports Complex, was also a help to our club, as volunteers from South Lincs, would help manage the bars and then the Round Table and other charities that host the event, would provide us with funding for equipment.

“Last year they paid for new lanes ropes, which the public also use.

“The previous time they paid towards our starting blocks.”
South Lincolnshire Swimming Club are determined to come back stronger though as and when they’re allowed.

Based at the Castle Sports Complex, the club are waiting to see when the government will allow leisure centres to open so they can get back into the pool.

Janet continued: “During the lockdown, our level two coach, Matt Gosling has been keeping contact with the squads doing land training via Zoom.

“He has also hosted or arranged weekly quiz nights and has been a great support to our swimmers.

“On June 15, Swim England produced Guidance for Clubs and Pools – ‘Returning to the Pool’.

“However, the Castle Sports Complex operator, Parkwood, is waiting for more government guidance as to when the pools can officially open and how.

“When they do reopen, it will no longer be a case of ‘business as usual’ and everyone will need to follow safe social distancing and enhanced hygiene regimes.

“There will be several restrictions in place and a new way of training – such as in double lanes and finishing a set mid pool rather than at the end of the lane.

“As a club will need to work closely with Parkwood to manage how we can still train effectively whilst managing the new protocols.”