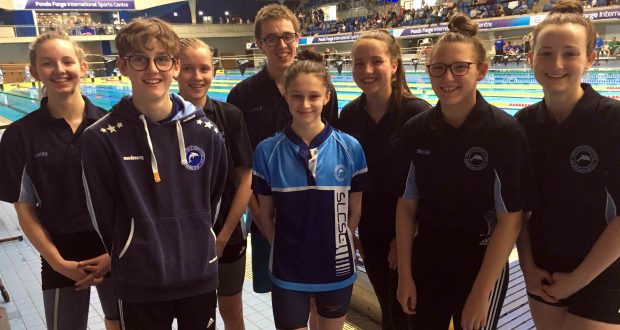 TOP TEAM: The South Lincs squad are pictured at Ponds Forge in Sheffield.

Members of South Lincs Competitive Swimming Club put on an exceptional performance as they headed to Ponds Forge in Sheffield for another day of East Midlands Regional Championships action.

The swimmers were contesting the sprint 50m events and the distance freestyle events (800m and 1,500m), aiming to produce new personal best (PB) times and make some of the finals available to them.

Mollie Briggs and Aurinija Maliauskaite got the day off to a very positive start with both girls setting new PB times in the heats of the 50m butterfly.

Briggs (14 years group) reduced her best time by more than a second to touch the wall in 31.23secs and Maliauskaite (15 years group) finished in a strong time of 31.10secs.

Both of these swims were enough to secure places in their age group finals, where they swam a little outside of their heat times to take tenth place.

Meanwhile, Ellisha Cookson had a big new personal best in the 800m freestyle.

She found herself in a fast-paced rhythm that she was able to maintain and worked her way through the field of swimmers to touch home for a fourth place finish in the girls’ 15 years age group in a time of 9.32.46mins.

Briggs was then back in action, swimming a solid race to finish a little outside of her best time in 9.43.41mins to take seventh place in the girls’ 14 years age group.

Team-mate Daisy Rummery had a fine set of performances, contesting the 50m backstroke and the 50m freestyle.

She swam well enough to break both her PB times and register 33.25secs and 29.19secs respectively.

Her times fell just short of making the finals in these events, finishing 11th in the backstroke and 15th in the freestyle.

South Lincs were also able to field a team in the girls’ 14-16 years 4x200m freestyle relay. The quartet of Emma Croker, Cookson, Maliauskaite and Daisy Rummery put in a superb team effort to take fourth place behind some of the region’s very best teams and swimmers.

While the aim was to break the nine-minute barrier, the girls finished in a very respectable 9.01.18mins.

Dusty Saines also had a successful campaign in her 50m freestyle event.

She produced an exceptional heat swim to finish in a new PB time of 28.97secs, lowering her PB by a massive 0.74 second margin.

Her result was enough to see her tie in 12th position and leave her in a swim off for the position of second reserve for the final.

She took the opportunity of second swim and produced another outstanding race in which she won the swim off and lowered her heat time yet again to a brilliant new best of 28.68secs.

Meanwhile, Oliver Sorrell was taking part in the boys’ 1,500m freestyle and really rose to the occasion.

He produced the swim of his life, and perhaps the race of the day, to work his way through the field with a fast pace that he was able to maintain throughout the race.

Championships, to be held in August at Rother Valley.

Cookson was then back in action in the 50m breaststroke, producing a solid heat swim that saw her just dip under her PB and register a 35.67secs swim to qualify to the girls’ 15 years age group final.

In that final, Cookson flew out of the blocks to open her race exceptionally quickly and place herself at the front of the field. Working hard in the second half of the race, she was able to touch home in a new best time of 35.32secs and claim the bronze medal.

Next up, Maliauskaite had her opportunity to shine in the 50m freestyle.

She produced a solid heat swim and a new PB of 28.66secs to qualify in fourth place for the girls’ 15 years age group final.

In that final, Maliauskaite was hoping to move up a spot into a medal winning position and she showed every determination to do so in the race with a fast start to the half way mark.

Hard work in the second half of the race – and amid a blanket finish – she had enough to claim the silver medal in a fine 28.25secs.

Croker, who had an excellent day of sprint swimming, qualified for both the finals of the 50m butterfly and the 50m freestyle in the girls’ 14 years age group.

Swimming determinedly in both of the events, she took bronze in the butterfly with a PB of 29.19secs and then claimed the silver medal in the freestyle in another PB of 27.51secs.