Now the dust has settled after the election, I am happy to have this opportunity to share some of my reflections on aspects of the campaign and on things going forward.

Firstly though, I’d like to say thank you to a few people.
I would like to thank all of the voters in Spalding St Mary’s for giving me their support again. There is nothing quite as humbling as having other people put their trust in you.

Thank you to all of the candidates who took part, each seat was contested in a way that should make everybody proud to have been part of the democratic process.

Thank you to the staff whose hard work will go unnoticed by all, apart from those of us in the middle of it and most of all thank you to all of the people who actually voted for any of the candidates. 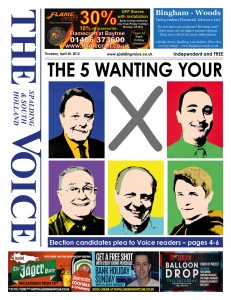 If I had three prizes to give away, they would go to:
Best piece in a newspaper: The Spalding Voice for the Andy Warhol stylised front page.
Most surprising character: Winston Brown from the LFP/Spalding Guardian (one of the quietest reporters I know) for his outstanding chairing of their hustings event at the South Holland Centre.
Most bizarre break from the campaign trail: Richard Fairman (my UKIP opponent) for inviting me to tea and biscuits on his boat with an MEP, parliamentary candidate and several of their council candidates.

Now it’s over the hard work starts again, I was re-elected as council leader last Wednesday and announced the new Cabinet members who will be steering the council for the next year.
They are:

Over the coming weeks I’m sure The Voice will be interviewing each of them on what they are doing on all of our behalves.