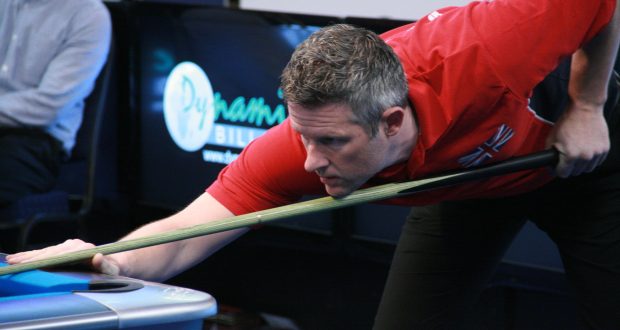 A stellar 103 break from Mark Gray lit up the Spalding and District Snooker League’s Knockout Cup fixtures on Thursday night.

The O105 handicapper also added a 27 clearance as he helped his Bourne SC A side to a battling 3-2 victory over Consti F, with Oliver Player (O28) seeing off Warren Peel (scr) in the final frame.

The shock of the round saw Division One leaders Pyramid A dumped out by Division Three side Whittlesey B 3-2.
In a tie that went to the very last black, Kay Skutela (R21) edged past Dean Cole (scr) to send the Bourne boys packing.

Likewise, Holbeach A were upset by lower-graded Services B 3-2.

Mark Woodberry (O63) was unfortunate to be on the losing side after making two breaks of 29.

There was no such trouble for Pyramid C, who dispatched Donington A 4-1.

The top tier high-fliers were on fine form, with Spencer Dawkins (O56) sinking a 38 break and Alfonso Palumbo (O49) adding a 35.

Another Division One side progressing were Services A, who got the better of hosts Consti J 3-2 in an all-Spalding tie.

Elsewhere, Sutton Bridge A defeated hosts Consti I 4-1 in a tie that saw three of the five frames end as black ball games.

Also progressing 4-1 were Services D, who knocked off hosts Boundary B.

Jake Haslam (scr) starred with a 29 break for the victors.

There was an all-Pyramid showdown between the B and E sides that went to the wire, too.

It was Pyramid B who emerged as the winners, with star man Lester Gaunt (O42) making a 37 break to help send the Division Three side through.

Whittlesey A, meanwhile, claimed their home match against Bourne SC B after the visitors failed to turn up.