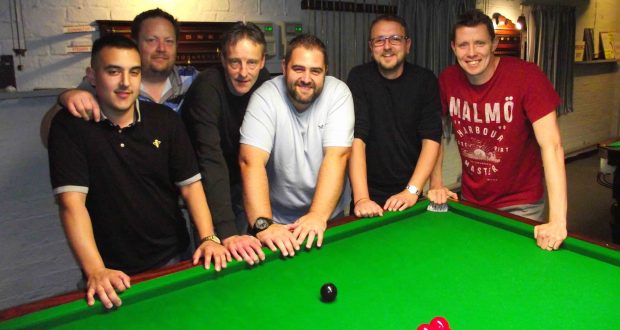 A stellar 76 break from Bren Bowman lit up the latest round of fixtures in the Spalding and District Snooker League last Thursday night.

Tulips A cueman Bowman (O56 handicap) made the super score en-route to seeing off rival Steve Spencer (R14) 115-89 as his team defeated Consti B 4-2.

It was team-mate Martin Anderson (O7) who clinched Tulips’ second win of the season in the final frame of the Division One clash, making a 20 break in the process.

At the top of the table, Pyramid D have a one-point lead following their 5-1 success over Holbeach C.

Bourne SC A are two points off the pace after a 5-1 success of their own at Boundary B.

They are level on points with Holbeach D, who earned a narrow 4-2 triumph over Holbeach A in a tense all-club affair.

Ian Woodberry (scr) beat Zac Rowlett (O14) on the final black of the last frame to secure the lion’s share of the points in a game that also saw Donald Monk (scr) sink a 25 clearance.

Meanwhile, Boundary A remain bottom after suffering a 5-1 beating at Tulips B.

Darren Woodberry (O42) and Mark Woodberry (O56) made breaks of 38 and 25 respectively for the Spalding side in that one.

In Division Two, three teams – Boundary C, Consti F and Donington A – share the lead on 25 points after five wins from six games.

Boundary sit top after edging out Gosberton A 4-2, with Dougie Lythgoe (O14) pipping Geoff Wand (R14) on the final black of the match.

Consti F are only second on alphabetical order following their 4-2 home win over Whittlesey C.

That one also went the distance, with Bryan Turnell (R21) winning the all-important fifth frame.

Third-placed Holbeach E complete the deadlocked trio in third, having also won 4-2 at Crowland A. Lee Pickett (O21) sank a 23 break and 22 clearance in that one.

It was, however, Donington B who were the big winners in the second tier as they whitewashed Tulips C 6-0.

Down in Division Three, Pyramid B finally lost the league’s only remaining unbeaten record as they went down 4-2 at home to Gosberton C.

Second-placed Consti I took the chance to close the gap at the top to three points by winning 5-1 at winless Gosberton B, while Gosberton D slip to third after a 5-1 home beating by Whittlesey B.

Elsewhere, Martin Perkins (O21) sank a 20 break in Consti D’s 5-1 win over Consti E to move them within six points of the summit.

Consti A and Pyramid E also enjoyed welcome 4-2 wins to edge up the table.