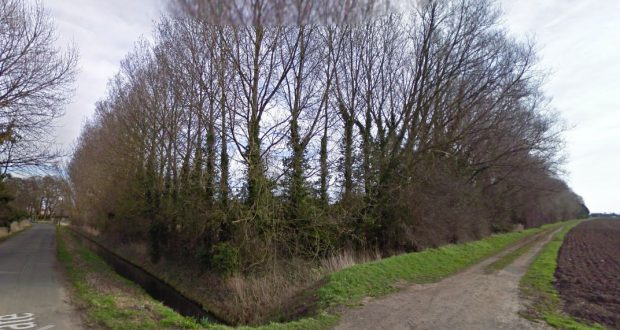 The site on Dam Gate, Holbeach

A plot of land given to provide a new medical centre for Holbeach is being sold by the NHS.

The 1.58acre site on Dam Gate is being auctioned off by Allsop’s with a guide price of £90,000.
It was given to the health service by a local developer as part of a section 106 agreement over a decade ago.
Local politicians have expressed concerns about the future of health care in the town with a number of large scale developments being built, including planning permission having been granted for a 900-home estate and an approved application for 188 homes on land adjacent to the site.
But the NHS has told The Voice that it was decided last year there’s not a need for more medical facilities in Holbeach leading to the sale of this land.
A spokesman for NHS Property Services said that no conditions for its use were placed on the land.
He said: “The Dam Gate site in Holbeach was declared surplus for clinical use by South Lincolnshire CCG in March 2019.
“As the owner of the land, NHS Property Services (NHSPS) will dispose of the site and reinvest all the capital receipt directly back into the NHS estate.”
The South Lincolnshire CCG merged with three other groups to form the Lincolnshire CCG earlier this year.
A spokesman for that group said: “NHS Property Services manages all NHS sites, including the disposal of parcels of land, such as that at Dam Gate, Holbeach.
“Any proceeds from sales will be reinvested into the NHS estate, although we cannot confirm specifically where this might be.”
The CCG declined to comment further when asked about the need for medical services in Holbeach.
Coun Nick Worth (pictured) said he’d previously spoken to the medical practices in Holbeach about more facilities but they’d said they have the capacity.
He described the selling of the land as “frustrating”.
He said: “It’s particularly disappointing that the money will disappear into the ether rather than be used in Holbeach.
“It was a clear Section 106 agreement to help medical facilities in Holbeach and if they’re trying to find a way round that it’s really disappointing.
“The land and that money for Holbeach was to help medical facilities.
“I don’t think there is a strategic plan for Holbeach when we’ve got 2,000 homes being built over a 20-year period,” he said.
“I think we will need more medical facilities here and we should be looking at how we’re going to do that.
“I want to see what the health services plans are for all the new houses being built.”