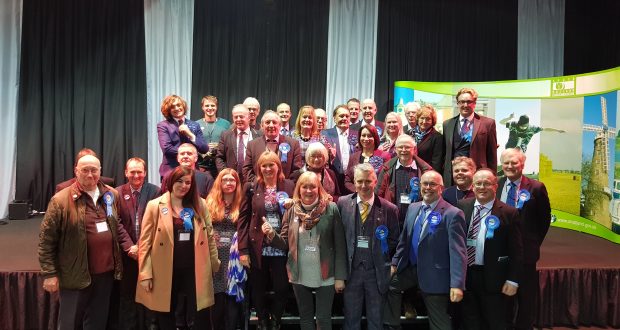 Sir John Hayes has been elected MP for South Holland and the Deepings for a seventh time with a ‘remarkable’ result.

That’s up from 69.9 per cent in the previous General Election in 2017 and he’s increased his majority over the nearest candidate to 30,728.

It’s the seventh time in a row he’s increased his percentage which was already one of the largest in the country.

In second place was Labour’s 25-year-old candidate Mark Popple with 6,500 whose vote loss seemed to be mirroring the national trend.

In third was the Liberal Democrats’ Davina Kirby with 3,225 votes, more than doubling their vote share from 2017.

Independent candidate Rick Stringer, standing in his second General Election, polled 503. He was unable to attend on the night.

A full video of the result announcement including speeches is available from The Voice’s Facebook page.

The Conservative Party romped to an 80 seat majority overall.

Full reactions from the candidates are here.