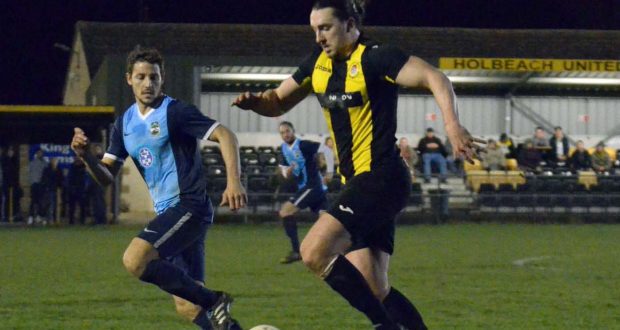 Ten-man Spalding United slipped to a 2-0 defeat at Stocksbridge Park Steels on Saturday, while Holbeach United picked up a fine 3-0 win at Eynesbury Rovers despite playing the entire second half a man down.

Starting with Spalding, any slim hopes that had of mounting a Evo-Stik NPL First Division South title tilt now appears over thanks to goals in each half from Matt Reay (19) and Brodie Litchfield (68).

Leon Mettam missed a penalty when the Tulips were trailing 1-0, while Kern Miller was sent off soon after the second Stocksbridge goal.

The loss sees third-placed Spalding fall 16 points behind leaders Shaw Lane, while all of their play-off rivals picked up maximum points.

Chris Rawlinson’s side do still have a seven-point cushion back to sixth-placed AFC Rushden and Diamonds, though.

In the ChromaSport UCL Premier Division, Holbeach made it four wins in a row in commanding fashion.

First-half goals from Spencer Tinkler (22) and Charley Sanders (28) gave the Tigers a 2-0 lead at the break, but they did have Stacy Cartwright sent off just before the interval.

It didn’t hit their hopes too hard, though, with Sanders adding a second from the penalty spot 11 minutes from time.

Now in their best form under boss Seb Hayes, Holbeach have moved up to sixth and have a genuine chance of finishing in the top four.

Goals from Ollie Maltby (2), Tom Brooks, Liam Ogden and an own goal saw Pinchbeck beat Stanground Sports 5-2 at Knight Street, while Harrox were 4-1 victors at Sawtry.

Both are now just one point behind leaders Peterborough Sports Reserves, who were stunned 2-1 at Leverington Sports.

Crowland Town also picked up a 3-2 win over Wisbech Town Reserves to climb off the bottom.

In Division One, leaders Moulton Harrox Reserves lost for the first time in the league as they slipped to a 3-2 home defeat against Peterborough Polonia.

But there was a morale-boosting 5-1 victory for basement boys Spalding United Reserves against Baston.