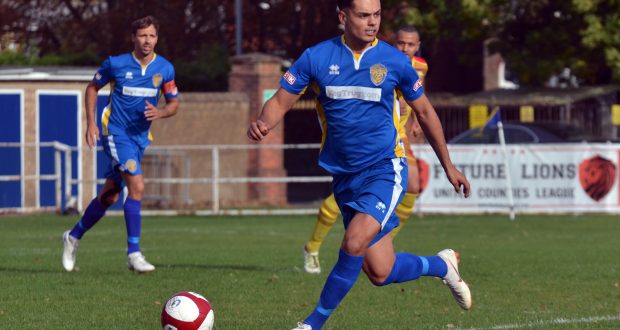 Spalding United twice came from behind to draw 2-2 with Gresley on Saturday, while Holbeach United drew 0-0 at Newport Pagnell Town and Pinchbeck United picked up a 2-1 victory at Harborough Town.

Starting at the Sir Halley Stewart Playing Field, Spalding were indebted to a last-minute penalty from Cenk Acar as they made it two games unbeaten.

Kane Lee’s 38th-minute effort put the Moatmen back ahead – and they held that lead all the way up until the 90th minute, when Acar’s second penalty in as many weeks secured Matt Easton’s side a share of the spoils.

In the Future Lions UCL Premier Division, Holbeach’s six-game winning run came to an end at Willen Road – but a draw with Newport Pagnell is never a bad result.

The Tigers are fourth in the table after the stalemate, now eight points behind leaders Daventry Town.

Also above them are second-placed Pinchbeck United, who bounced back from their first loss of the season with a battling victory.

The winner came from Ollie Maltby five minutes into the second period, with the striker having been introduced as a half-time substitute.

Ian Dunn’s side are five points off top spot with a game in hand.

Down in the ChromaSport PDFL Premier Division, Moulton Harrox are 11 points clear at the top atfer a 2-0 derby victory over Tydd at Broad Lane.