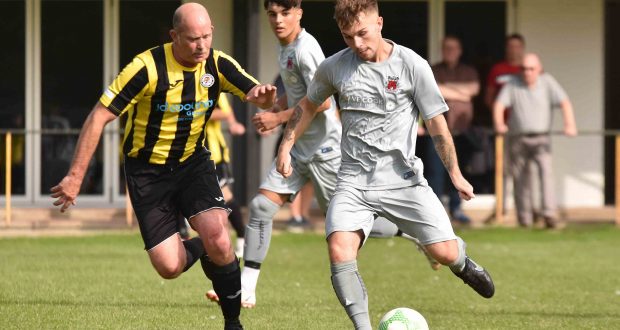 VETERAN: Dean Elston in action for Holbeach on Saturday. Photo by JAKE WHITELEY

Spalding United picked up a 1-0 win at Tividale on Saturday to keep their Emirates FA Cup run going, while Holbeach United and Pinchbeck United battled out a 0-0 draw at Carter’s Park in the Uhlsport UCL Premier Division North.

Starting with the Tulips, a second-half strike from Stefan Broccoli (47) settled the first qualifying round clash and banked Gaby Zakuani’s side more than £2,000 in FA prize money.

Meanwhile, a severely depleted Holbeach – who included veteran defender Dean Elston in their starting line-up – held Pinchbeck in what was a drab South Holland derby.