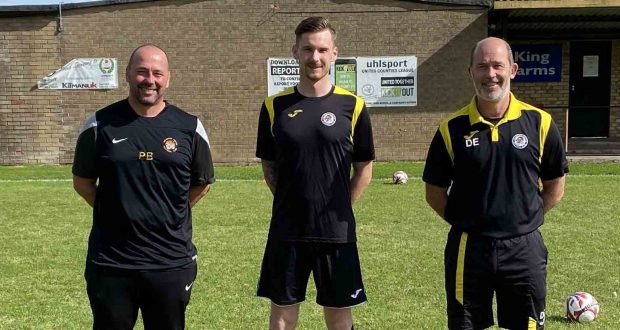 Ten-man Holbeach United were dumped out of the Emirates FA Cup by Sheffield FC on Saturday, while Pinchbeck United were soundly beaten at Wellingborough Town in the Uhlsport UCL Premier Division and Spalding United concluded their pre-season with a timely victory.

Starting with the Tigers, a perfect first-half hat-trick from prolific striker March Newsham was the catalyst for their FA Cup exit as the NPL side eased to a 4-0 win at Carter’s Park.

Sheffield added a fourth after the break thanks to Ryan Viggars, which came following a red card to Joe Smith for hitting out at an opponent.

There was some good news for Holbeach, however, with new signing Liam Tunstall unveiled prior to kick-off and top teenage talent James Clark handed a debut in the closing stages.

Pinchbeck, meanwhile, suffered their second league loss from as many games after going down 4-1 at Wellingborough.

Dan Worthington did level for the managerless Knights with their first goal of the season just before the break.

The home goals came from Lloyd Buckby (2), Bayley Leslie and George Wingrove as Pinchbeck fell to the bottom of the early standings.

Elsewhere, Spalding picked up a 3-0 success at lower-graded Brigg Town in their final friendly game.

Goals from a triallist, Joel Brownhill (pen) and Jacob Fenton did the job for the Tulips.