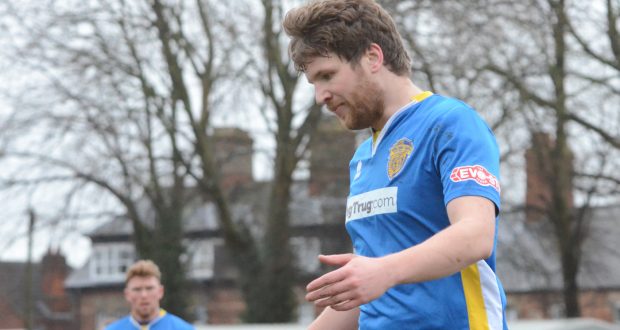 HAUNTING HIS OLD SIDE: Tom Siddons, pictured in his Tulips days, scored for Stamford on Saturday. Photo by JAKE WHITELEY

Holbeach United romped to a 4-0 home win over Peterborough Northern Star on Saturday, while Spalding United battled back from 2-0 down to draw 2-2 with rivals Stamford.

Starting with the Tigers, they cruised to a Uhlsport UCL Premier Division derby victory at Carter’s Park.

Spencer Tinkler headed them into a half-time lead following a Liam Adams cross, before Jonny Lockie took advantage of another Adams assist to make it 2-0 early in the second half.

Adam Jackson’s ball into the box was then deflected into the net by a Star defender for 3-0, before Luke Avis’ superb lob rounded off the rout.

With the clash being the only league game played on Saturday due to the wet weather and FA Vase, Holbeach move up to third – level on points with second-placed Deeping Rangers – as a result.

Oliver Brown-Hill lashed the Daniels into the lead with a stunning finish after just 30 seconds, before Tom Siddons’ spectacular lob put the visitors 2-0 ahead on 20 minutes.

However, man-of-the-match Lewis Brownhill pulled one back for the Tulips just before the break as he finished off a cross from Jamie Jackson.

The game’s big moment then arrived on 65 minutes when Stamford’s Cleveland Taylor was sent off for fouling a clean-through Jamie Jackson.

Jackson picked himself up to level from the spot and, although both sides had chances to win it, the scores remained 2-2 at the Sir Halley Stewart Playing Field.

Crowland Town also progressed with a 2-0 victory over Barnetby United.