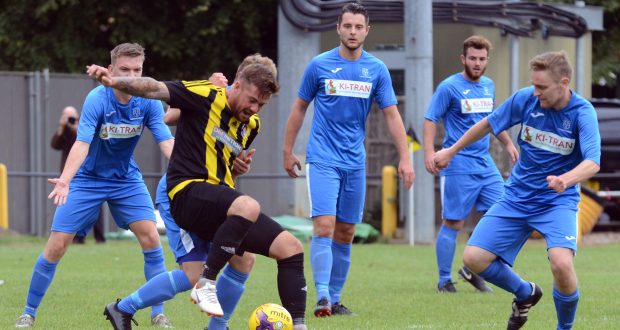 Holbeach United’s impressive form continued with a 1-0 win over Harborough Town on Saturday, while Spalding United were hammered 3-0 at home by Lincoln United and Pinchbeck United saw a 3-1 lead turn into a 6-3 loss at Newport Pagnell Town.

Starting at Carter’s Park, the Tigers extended their unbeaten run to  11 games with a battling Future Lions UCL Premier Division win over Harborough.

The visitors were the better side in the first half, hitting the woodwork and seeing a goal disallowed.

But Holbeach are made of stern stuff and they found a winner in the second half when Josh Ford headed home at the second attempt.

The win keeps Seb Hayes’ side fourth in the table, still 14 points off leaders Daventry Town.

Above them, Pinchbeck United suffered a only their second defeat of the UCL Premier Division season – but Newport Pagnell imitated Daventry in smashing them for six.

The Knights, who are now third in the table, had led 3-1 in the first half but a Tom Liversedge hat-trick and a double from Dom Lawless, plus a Josh Winters goal, got the job done for the Swans.

The Tulips, who stay 16th in the table, were handed a 3-0 home reverse, with all three of them coming from Rob Norris.

Down in the ChromaSport PDFL Premier Division, Moulton Harrox saw their unbeaten start to the season shattered by a 4-0 beating at Whittlesey Athletic.

After 15 games unbeaten, the table-toppers were sunk by goals from Matt Heron (2), Jamie Darlow and David Kilby.

Holbeach United Reserves were also handed a 4-0 reverse at Netherton United, while Sutton Bridge United went down 4-1 at Langtoft United and Long Sutton Athletic lost 4-2 at home to Stamford Lions.

There was a 3-1 victory for Tydd at Ketton, however.

More football in this week’s Spalding Voice and online throughout the week.