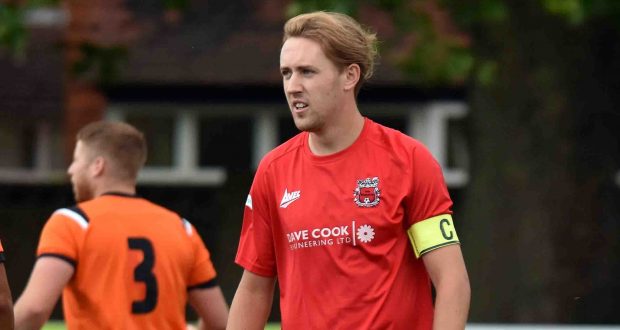 Spalding United picked up a fine 2-1 win at Corby Town on Saturday, while Pinchbeck United ended a lengthy winless run by seeing off Selston 3-1 and Holbeach United went down 2-1 at home to Quorn.

Starting with the Tulips, goals from Chris Assombalonga (12) and Stefan Broccoli (49) secured Gaby Zakuani’s side all three points in the Pitching In NPL Midlands Division at Steel Park.

Stephen Diggin pulled one back on 66 minutes for the hosts, but Spalding held firm. They are back in action at home to Histon on Bank Holiday Monday (3pm).

Two goals from skipper Dan Worthington and a first Knights goal from Harry Peasgood got the job done for Pinchbeck, who had fallen behind in the first half.

The win sends them up to 12th in the early standings.

Staying in the UCL, Holbeach’s search for a first league win of the season continues after a 2-1 home reverse against Quorn.

Nick Jackson nodded the Tigers ahead inside ten minutes at Carter’s Park, but strikes in the last 20 minutes from Chib Chilaka (70) and Brandon Fox (85) turned the game on it’s head.

Phil Barnes’ side are 14th with just one point from four games.

In the ChromaSport PDFL, a goal from Josh Ford couldn’t stop Moulton Harrox from slipping to a 2-1 Premier Division loss at Wittering – making it three defeats in five for Bobby Patterson and Tim Cole’s side.

Crowland Town were 2-0 winners over Oakham United as Jordan Kirchin and Sam Leggatt netted in the first half at Snowden Field, while Long Sutton Athletic drew 2-2 at home against Stamford Belvedere.

In Division One, Moulton Harrox Reserves won 4-1 at Eunice Huntingdon and Tydd beat Cardea 2-1.
But Pinchbeck Reserves went down 6-2 at home against PNS Reserves and Crowland Reserves suffered a 7-1 reverse at Ramsey Town.