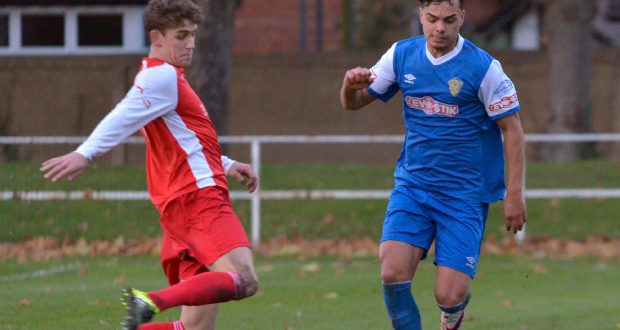 Starting with the Tulips, Cenk Acar’s 73rd-minute strike was enough to settle a close contest at Kidsgrove.

The win moves Chris Rawlinson’s side seven points clear of fourth-placed Basford United – who they host on Tuesday night – and eight clear of Newcastle Town in sixth.

Meanwhile, Holbeach were pegged back by a late Luke Stone penalty (86) at Carter’s Park as their four-game winning streak was halted.

A neat near-post finish from Matt Long gave Cogenhoe the lead just before half-time, but the Tigers looked like they’d pinched all three points when Matt Warfield (75) and Charley Sanders (76) netted deflected goals within 60 seconds of each other.

That was, until Long was fouled by keeper Ricky Drury in the box, allowing Stone to slam home his spot-kick and ensure the spoils were shared.

The draw leaves Seb Hayes’ charges in seventh place in the standings.

Down in the ChromaSport PDFL Premier Division, first-half efforts from Liam Ogden and Callum Lawe gave Pinchbeck United a 2-0 Knight Street win over Ketton, while Moulton Harrox cruised to a 5-0 win over Stanground Sports at Broad Lane.

Both sides are a point behind leaders Peterborough Sports, who host Pinchebeck on Tuesday night (7.45pm).

In Division One, nine-man Long Sutton Athletic were put to the sword 15-0 at Whittlesey Reserves, while Sutton Bridge United were 4-0 winners at Spalding United Reserves.

More football throughout the week at www.spaldingvoice.co.uk and in Thursday’s edition of The Spalding and South Holland Voice.