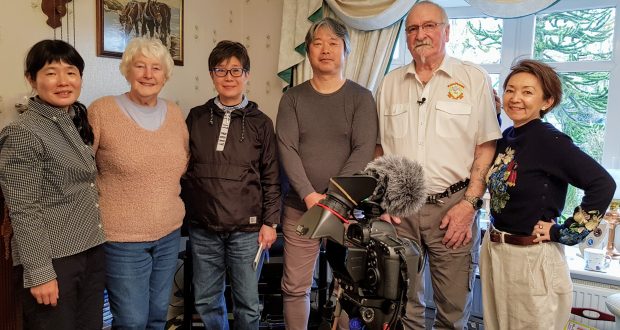 Sandie Hern (second from left) with husband Doug (second from right) and a Japanese film crew making a documentary on nuclear veterans.

Final goodbyes have been said to a Moulton woman who has spent years campaigning for justice for veterans of nuclear testing around the world.

Sandie Hern passed away aged 75 after a short illness with her funeral having taken place at Surfleet Crematorium last Monday.

She dedicated much of her life to helping out with husband Douglas’s charity and campaign group British Nuclear Test Veterans Association (BNTVA).

Born in Lowestoft, Sandie travelled much of the world in her early adult life including singing in a group in Singapore and being a swimming teacher in the Canary Islands.

The pair met at an engagement party when back in this country, and began playing in a band called The Kestrels together

She devoted her life to standing alongside Douglas who witnessed five atomic bombs being exploded and his fight for justice for those who were part of the nuclear tests for 40 years.

“She was my right hand and really good at organising,” he said. “I think in total she had about 16,000 veterans and their families whose interests she looked after.

“She worked tirelessly for all of them, even doing things such as sorting Gift Aid out for them.

“Any bereavements in the family she’d be there for them and organising the funerals and she always created friendships wherever she went.”

That included abroad with Douglas saying tributes have been pouring in for Sandie from across the globe.

She worked with nuclear test veterans in America and was made an honorary member of the Oregon Atomic Veterans group, while many years earlier was heavily involved with helping Gilbertese refugees fleeing the country now known as Kiribati.

The pair also recently had a Japanese TV crew film them for a show on nuclear veterans that’s set to be released soon.

“Sandie was just an amazing girl,” Douglas continued. “She was such a graceful lady. It’s a great loss.”