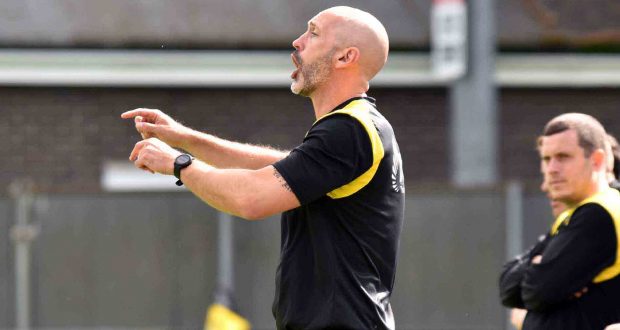 Just two weeks after questioning his own future as manager, Danny Hussey now feels his Holbeach United side are capable of taking on anybody at Step Five of the non-league ladder.

The Tigers have won four games on the spin since Hussey’s frank and honest assessment of their shortcomings and now go into Saturday’s Buildbase FA Vase clash at South Normanton Athletic (3pm) in high spirits.

Fresh off the back of a 6-0 weekend win over Cogenhoe United and a 1-0 midweek success over Rothwell Corinthians, Hussey wants his side to carry their form into what looks a tricky test against Midland Football League Premier Division high-fliers South Normanton in Derbyshire.

“Two or three weeks ago I’d not have fancied us against anyone,” admitted the Tigers boss. “We’d have struggled against lower-graded sides, that’s the reality.

“Now, I’d honestly back us against anyone at this level. There are bigger teams out there with better budgets, but we’re full of confidence at the moment.

“Saturday is a great challenge for us. We’re playing good stuff, but South Normanton will be a really good test; if we can win there or even bring them back to Carter’s Park, I’ll be delighted.

“That’s the thing about the FA Vase, it gets harder and harder with each round.

“But, since the Whittlesey Athletic win a few weeks back we’ve got better and better with each game.

“Me being me, I’m still demanding more from the lads – that’s just how I am as a manager.

“I’m genuinely enjoying the performances the lads have been producing and I feel like we can keep this run going in the Vase too.

“Testing ourselves against better teams is the next step for us.”

Saturday’s first round opponents South Normanton are based near Alfreton and sit sixth in their league, albeit having played only eight games so far (table-toppers Walsall Wood have managed to get 11 games in).

They’ve won ten of their 14 games in all competitions this season, including seven of their eight home games.

Hussey has no new injury concerns ahead of the trip, with midfielder Luke Avis back in the reckoning and defender Joe Braithwaite expected to be back in the squad.

Striker Michael Frew is also set to have his protective boot taken off his injured foot this week, meaning he could return inside the next few months.