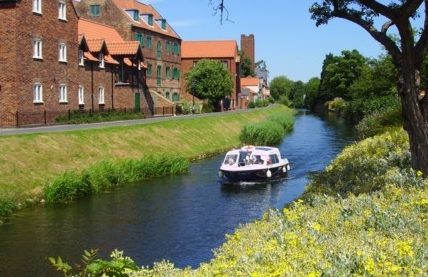 Spalding’s rivers were not always so passive

This week, John Tippler talks about the waterways of Spalding.

Spalding’s main river is, of course, the Welland, whose town section we now know as a pleasant, but passive, feature of the town.

It was not always so passive. In the 1930s and earlier 40s it was still connected directly to the sea and was a salt-water river.

Its personality was demonstrated twice daily. On the incoming and outgoing tides, the water fairly raced through the town, out-pacing any walker striding alongside it.

The surface was covered in whirls and whorls as if to indicate the massive amount of energy being transported.

At high tide, the water could come well up the banks, so that you were quite aware of its presence, and at low tide it was no more than a stream.

At low tide, you could stand on High Bridge and look down at a river only six or seven feet wide, with salt-water crabs scuttling about on the muddy sides.

Further along, at Little London Bridge, people used to lower eel-traps (boxes full of holes) into the river, pulling them up after a while and – usually – finding several meals worth of eels in them.

In the snow-melting season, the amount of water coming from inland, could bring the river up to road level or above.

I remember one time in the war years when school children were suddenly given time off to help with the urgent filling of sandbags to form a wall along London Road to stop the river overflowing.

Often in winter, the whole of Cowbit wash (before it was divided by the new road embankment) would flood and look like the sea. Then it would freeze and form one of the country’s best speed-race skating venues.

The mother of a junior-school friend was landlady of the Punch Bowl inn in the late 30s. Some Saturday mornings he and I did the errand of taking next week’s drinks order to Soames Brewery on Cowbit Road.

One week, we were also asked to bring back a small cask of rum.

Along Cowbit Road we began rolling it with our feet, to save carrying.

That wasn’t a good idea. It ran out of control and into the river.

His mother sent us back with a garden rake to try to retrieve it, and we stood on the bank near Ayscoughee for a long time fishing for it unsuccessfully. The swift current had taken it beyond our reach.

The Welland was no good for swimming until you got as far up as the Deepings area.

But there were other places nearer Spalding. The ‘River Natts’ (Vernatts) and the New River were really land drains, but were spoken of as rivers.

Both of them had places where you could not only swim, but have lots of other fun too. Those on the Vernatts were Jobson’s Bridge, Two Plank Bridge, a spot near the Sleaford line railway bridge, and another near the old Sugar Store (roughly where the nature reserve pit now is).

On the New River, it was near Aistrup’s Willow Wood, which produced cane for their basket making.

In all those places, the water was only waist deep or a little more in the middle.

Young people could spend a large part of a day at any of those spots during summer holidays, and there was time to go there in the later afternoon even during school term time.

You didn’t just swim. You began by selecting a spot in the nearby field or wide expanse of grass near the river.

There you made your base and changing room by flattening a small area of the tall grass, which shielded your modesty while changing or sun bathing.

Then it was swim, dive for clams (New River), jump from bridges into the water, have water fights, plaster oneself with mud and let it bake on, chase around on the adjoining banks, or just lie in the sun.

It was all greatly superior to a swimming pool, but ended when all drains were deepened and agricultural chemicals began to contaminate.

The other river used by Spaldonians was the Glen at Pinchbeck or Surfleet. At Pinchbeck, people worried about being trapped by the weeds – it had happened.

At Surfleet, the Reservoir was the place! During the war years on summer’s days you might think you were at a seaside resort, with all the families and groups of friends, dressed in light summer clothes or just in their bathing costumes and sharing picnics and swimming.

The river was deep, so you needed to be able to swim; but there was one small place where boards had been installed to make a shallower pool for children.

For the modestly competent swimmers, a favourite thing was to dive in on one side and swim across to where an iron barge was moored.

You could climb on to it and lie on the warm – sometimes hot – iron deck for a while, then dive back from deck height.

Braver souls could go up on to the bridge and make a high dive from the top of the wall – quite a height, but the water was said to be ten feet deep there. Amongst the swimmers elegant rowing boats, hired by the hour, went easy-paced up and down the river. It was all a relaxed bliss.

The rivers once made a distinctive contribution to Spalding’s personality.