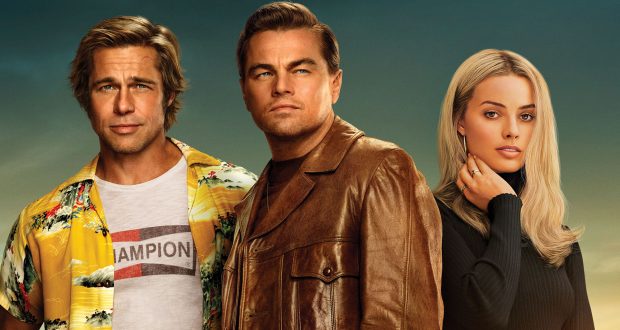 REVIEW: Once Upon A Time In Hollywood (18)

The ninth film by Quentin Tarantino is a kaleidoscopic trip into the old heart of Tinsel Town – while being funny, warm, mournful and occasionally very, very violent.

About two and a half hours into Once Upon A Time In Hollywood, the woman in the cinema next to me turned to her friend and loudly exclaimed: “This is the sh***est film I’ve ever seen”.

Now, that sort of cinema code violation would usually be unacceptable but in this strange case, it was sort of ok. As a casual filmgoer, it probably was one of the worst films she’s seen.

See, with film number nine, Tarantino has gone as far into the rabbit hole as he can go and created a dreamlike wonderland build up from pure cinema. He’s mainlined all his influences into his own vision of late ’60s Hollywood and for those who don’t savour every luscious inch of this very particular world, it’s likely hard to love.

In a heady, kaleidoscopic blend of every film Tarantino’s loved and his own films, Once Upon A Time In Hollywood is a dream for film lovers – with Tarantino front and centre in that, leading the charge down the lovingly recreated neon-lit streets of the city.

On the surface, the film is about ageing actor Rick Dalton (Leonardo DiCaprio) coming to terms with a potential twilight in his career. By his side, Brad Pitt plays Cliff Booth, his long-term stunt double turned dogsbody and best friend.

Mixed into their story is the real-life actress Sharon Tate, played beautifully by Margot Robbie.

Her inclusion mixes Tarantino’s dream world with the real world, with the likes of Bruce Lee (Mike Moh) and Steve McQueen (Damian Lewis) popping up to further blur the lines, along with the psychotic murderous Manson Family cult.

As the Once Upon A Time part of the title suggest, there is a (twisted) fairy tale quality to the film with a cathartic release too rich to spoil – but anyone aware of Tarantino’s glee in changing history in his later films (Hitler being shot to bits in Inglorious Basterds and a bloodbath of slave owners in Django Unchained) will recognise a continuation of the trend.

That is, if you know what happened in real life. The film makes few compromises.

The characters are richly drawn, with DiCaprio’s hero often on the edge of tears and Robbie’s Tate the epitome of bright-eyed glamour and warmth.

The film is probably closest to Tarantino’s 1997 perfectly crafted but unflashy Jackie Brown. While the emotional heart of that film was a tender romance between its two middle-aged leads navigating their older years, Once Upon A Time In Hollywood is a goodbye to an entire era in filmmaking, in a much more heartfelt way than the Coen Brothers’ recent Hollywood homage, Hail, Caesar!.

At two hours and 45 minutes, it’s a long film but regardless will be one to bask in.

Unless it’s the worst film you’ve ever seen, of course.

Review by Tom Cassidy, who logs and rates on social movie site, Letterboxd.