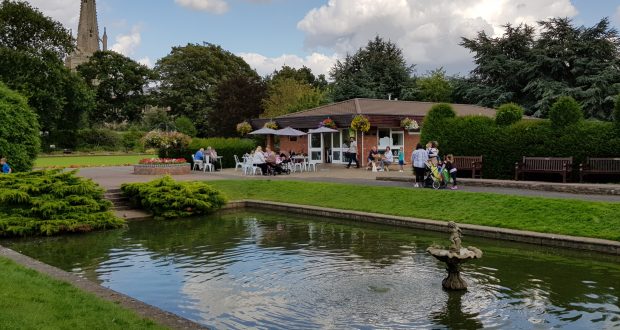 The newly revamped Ayscoughfee Cafe hasn’t finished its facelift yet, as the owners hope a dramatic remodelling  is on the cards.

New cafe managers Sarah Hall and Ellie Clay took over the cafe in July and have revamped the look, feel and menu, with fresh white walls and locally-sourced produce. 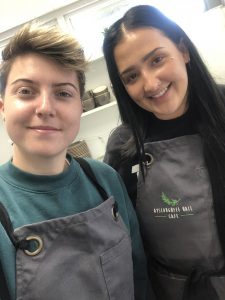 But the pair hope the building, which is owned by South Holland District Council, will soon be expanded to meet modern needs and fix the issue of poor toilet provisions in Ayscoughfee.

The keys were handed over to them in July and they had “two days to gut the place”, Sarah said. Local contacts immediately banded round for an all-hands-on-deck mission. “It was a nightmare but once it was finished it was amazing,” she said.
Their first six weeks at the helm have proved positive.
“It’s been amazing, we’ve had loads of great feedback on the food and everyone says when you walk in it’s like a different place. They all say it’s so needed,” Sarah said, adding: “It’s not finished, it’s not where we want to be. We’re getting an extension in the winter.”
Sarah said one option discussed with building owners SHDC is to extend the building out to the existing bowls green, or “knock the whole thing down and have a full-on restaurant.”
There are also plans to install an open kitchen and the cafe will get its own customer toilets, Sarah said.
South Holland District Council confirmed new toilet provisions were on the cards for Ayscoughfee but haven’t committed to any other work.
An SHDC spokesman said: “We are currently reviewing options for the provision of toilet facilities in Ayscoughfee Gardens, in relation to both access for users of the café and the public toilets in the pavilion.
“We are always happy to work with local residents and businesses who are ambitious and enthused about plans for
the future, however, no further development is currently planned for the site at this time.”
Meanwhile, Sarah and Ellie are working on their seasonal menu. Sarah: “Once the summer food is finished, the cafe will launch its winter menu of stews and soups, and afternoon tea in the autumn.
“Every morning we go round our suppliers in Spalding and then come to work.”
Ellie’s father is a potato farmer so the potatoes come straight from the fields in Whaplode to the cafe.
Sarah said the couple previously had to travel to neighbouring towns and cities to go out for lunch. “We wanted to create something that we wanted to go to. On our days off we’d have to travel to go to lunch. When we got the cafe, we decided ‘let’s create something that we would come to so people don’t have to travel from Spalding.’
“Already people are coming from Boston every other day and eating lunch, ordering the same thing,” Sarah said.
2019-08-21
Richard Rush