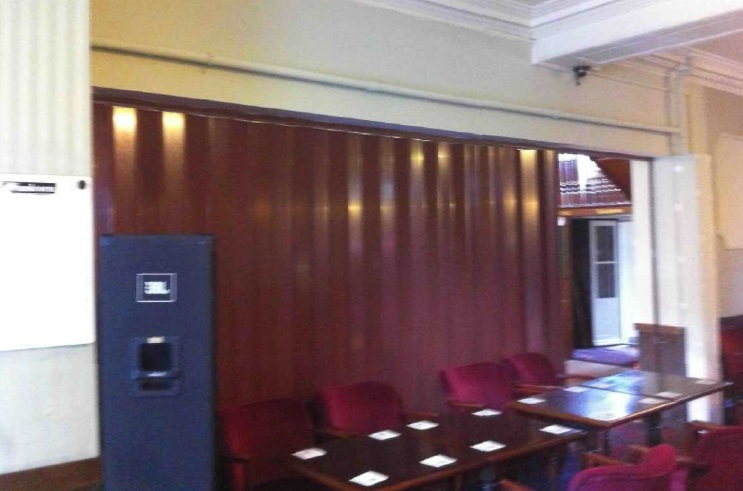 Replacing wall with shutter doors is ‘crime’ against listed building

Internal work carried out at Spalding Constitutional Club without planning consent has been described as a “crime” against the Grade II listed building.

A wall between the reception hall and bar has been knocked down and replaced with concertina shutter doors.

The club says it was to safeguard its trading future by enabling a larger area in which to hold functions. But the work at The Manor House in Broad Street has been sharply criticised by Spalding and District Civic Society.

Vice-chairman and planning committee member Robert West said: “It’s a crime against the building because it’s destroying the fabric of it. It’s totally out of keeping.

“It’s a very significant building in Spalding and the reception is quite an imposing aspect with the large stairway.

“What you’ve got now is brown painted shutters that look very industrial and commercial.”

The club was requested by South Holland District Council to submit a retrospective planning application, subsequently turned down.

Mr West added: “Retrospective applications are never a good thing because it’s like someone has been ‘found out’.

“This one has been turned down – and rightly so.”

He admitted to surprise that nobody involved with the project realised that permission to work on a historic property was required.

Consti Club chairman Bill McGowan, who said he had “never heard of the civic society”, claimed work had been carried out without all planning consents due to a “misunderstanding”.

The club engaged a local company – which he declined to name – to carry out the project on its behalf.

Mr McGowan claimed that building consent and building regulations approval had been given, but the club was unaware that English Heritage also needed to grant permission.

He said: “We are now exploring how we can make a further amendment which suits all parties. It’s not that we have to reinstate the wall or anything of that ilk.

“We will be submitting plans which are more in keeping with what English Heritage wants.

“It may be that we put in a different sort of screen.”

Mr McGowan added that the load-bearing wall removed was in a bad state.

“As we started to take the wall down two large cracks were found. And it wasn’t supporting the snooker room upstairs as it should have been. That has now been put right,” he said.

Weston Hills firm Weston Design, which submitted the retrospective planning application, said the work had been carried out “sympathetically” and timber panelling had been preserved for use in a proposed draught lobby entrance porch.

The council’s refusal notice states: “The demolition of the internal wall has an unacceptably harmful impact on the special architectural and historic character of this Grade II listed former Georgian residence.

“The change to the character of the building as a consequence of the effective loss of the entrance hall as a separate entity is particularly significant and damaging.

“In terms of the proposed draught lobby, it is apparent from the submission that the character and appearance of the hallway and how it functions will be compromised by it.”