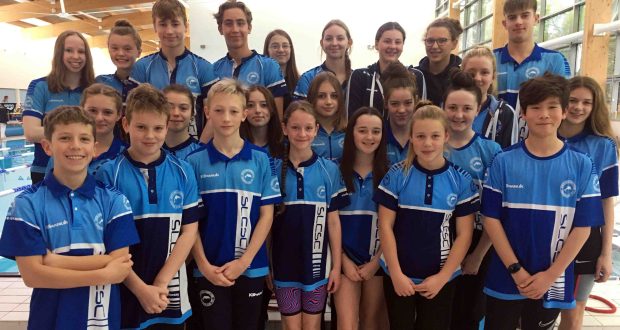 TOP SQUAD: The South Lincs swimmers are pictured at the City of Leicester Open Meet.

An amazing 125 medals were won and 19 club records smashed as South Lincs Competitive Swimming Club starred at the City of Leicester Open Meet.

A 33-strong squad from the Spalding-based club enjoyed one of their best-ever outings, with numerous personal best (PB) times also clocked.

The team was led by senior swimmers Rico Bringeman, Ellisha Cookson and Emma Croker – who between them claimed 15 new club records.

Bringeman produced outstanding performances in some of the toughest events in the pool.

He claimed gold medals in the 200m butterfly in a new PB and club record time of 2.05.88mins – and matched this achievement over half the distance in the 100m butterfly with a time of 57.93secs.

Bringeman also set a new club record in the 200m freestyle in a big new PB (1.55.35mins), which was inside the qualifying standard for the National Winter Championships.

Cookson also had a record breaking weekend in the breaststroke events, smashing her own records across all the distances.

In the 50m breaststroke she claimed gold medal in a new PB of 33.40secs, before completing the double in the 100m breaststroke with another gold in a brilliant swim of 1.11.25mins to set her second club record.

The final day of competition saw Cookson claim silver in the 200m breaststroke in another all-club record of 2.38.49mins.

A club record came in her first event of the competition, the 50m butterfly (28.95secs).

She then turned her attention to her favoured freestyle events and saw her dominate the 50m, 100m and 200m distances.

In the ten years age group both Kitty Lamb and Charlie Bisby made their mark.

Lamb finished the meet with nine gold medals and two silvers across a range of distances and strokes.

Bisby also collected nine gold medals from as many races, including his preferred freestyle events and his less preferred butterfly events. His outstanding swim came in the 200m backstroke in a PB of 2.54.44mins.

She went into the junior final as the fastest qualifier and claimed a second gold medal for this event, before adding to her collection with a bronze medal in the 50m butterfly.

Alfie Bisby was on gold medal winning form over the weekend as he claimed top spot in the boys’ 13/14 years age group in the 200m backstroke in a PB of 2.22.76mins.

He set another club age group record in the 200m freestyle in yet another PB of 2.07.90mins.

Also topping the podium was 12-year-old Sigourney Bolton. She posted a new PB in the 100m breaststroke to claim gold in the girls’ 11/12 years group. Another gold came in the 200m breaststroke in a PB of 3.08.66mins.

That qualified him for the junior final, where he took bronze. He also collected a silver medal in the 400m IM and bronze medals in the 100m and 200m breaststroke.

In the girls’ 15/16 years group, Mollie Briggs collected medals of every colour.

She collected gold in both the 100m and 200m butterfly, achieving a place in the senior final of both events. Briggs went on to take a bronze and a further gold respectively, before added a silver in the 400m freestyle.

Elsewhere, Alfie Robinson starred with gold in the boys’ junior final of the 200m backstroke.

Nine-year-old Francesco Monaco was the youngest swimmer at the meet and took gold in the 100m backstroke in a PB of 1.33.72mins.

Frank Lamb racked up the medals over the course of the weekend claiming four gold (all in new PB times) and eight silvers.

In the same age group, Oliver Sorrell collected a bronze medal in the 400m freestyle with a PB of 4.40.46mins.