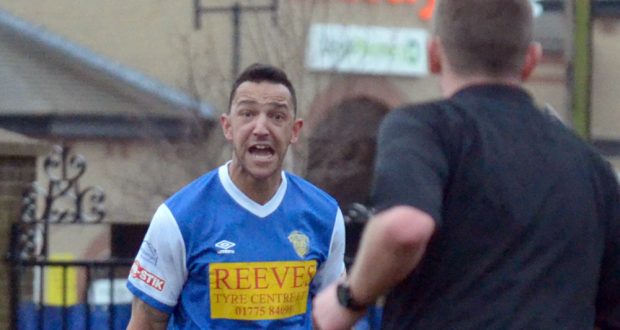 Rawlinson urges his players to make most of opportunity

Spalding United boss Chris Rawlinson is urging his players to take the chance to prove themselves this season.

The Tulips returned to pre-season training at the weekend after a successful campaign which saw them reach the EvoStik League Division One South play-off final.

However, a 2-1 defeat at Witton Albion in the final was followed in the summer by the departure of four influential players.

But boss Rawlinson reckons he still has plenty of artillery at his disposal with the added bonus of the league runners-up also gaining promotion this season.

Rawlinson said: “We need to make sure we’re over the disappointment of losing the play-off final and put things right this season.

“We have the incentive of an extra promotion place and we have got to make sure we grab the opportunity.

“It’s not going to be easy because there’s some good sides, but we will be doing all we can.

“There’s going to be some teams bringing in big names, others bringing in loads of players and others rebuilding on a higher budget.

“But I wouldn’t change the players that I’ve got at the club for anything.

“Nathan, Bradley, Kern and Leon are no longer with us, but that gives others the chance to step up and prove themselves.”

Fixter’s arrival gives Spalding a 15-man squad plus a triallist also trying to force his way into Rawlinson’s plans.

He added: “I was one player short of recognised defenders and needed extra competition for places so we’ve brought Jack in.

“You get some really good young professionals out of Lincoln City and Jack was one I wanted to work with so I’m really pleased to have him on board.

“I’m obviously not going to look a gift horse in the mouth if one came along, but I’m happy with what I’ve got.

“Everyone will get an opportunity and are more than capable of taking it.

“The Under 21s will provide a stepping stone and it will be a good experience for them.

“The reserves have a part to play as well. The club had 30 players at training on Saturday compared to nine last season. The club has come on really well.”

The Tulips start their friendlies on Wednesday night with a trip to Northern Counties East League Division One side Winterton Rangers (7.30ko).

Rawlinson continued: “They’ve put a cracking side together and it will be a real test for us. The players have come back to pre-season in decent shape which is good and I’m ready to get going again.”