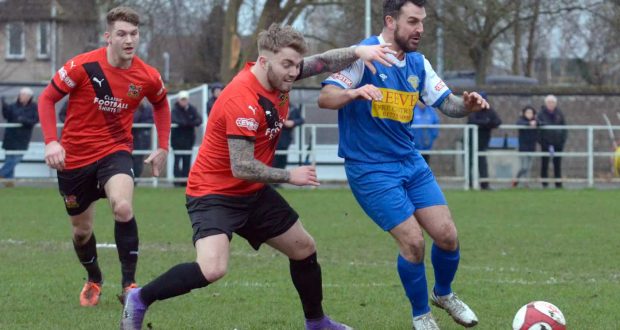 Chris Rawlinson has told his red-hot Spalding United side to keep on winning as they bid to apply pressure on the faltering top two.

With Rawlinson believing that a points haul in the “mid-70s” would be enough to secure a place in the play-offs, he’s hoping that the third-placed Tulips (68 points) will wrap that up in the next few weeks.

But he’s wary of losing momentum in the race for promotion and has challenged his charges to turn their already super season into an historic one.

With three away games – Stocksbridge Park Steels (Saturday, 3pm), Witton (Thursday, 7.45pm) and Kidsgrove Athletic (April 8, 3pm) – in the space of a week on the horizon, Spalding could really ramp up the pressure with a trio of wins.

Rawlinson said: “Why should we give up on the top two? We can still get enough points to win the league if the top two continue to falter.

“Of course, it’s highly unlikely. But I want to look up the table, not down. I’m not taking anything for granted, but you’d expect that we will get the points to seal a play-off place in the coming weeks.

“I imagine Saturday’s win at Leek will have made a few of them feel like we’re out of reach.

“I’ll not accept just treading water and settling for the play-offs, we need to keep the momentum going.

“It’s important for the boys to keep going. So let’s see if we can apply pressure on the top two and see what happens.”

Rawlinson, who rates the first period in Saturday’s 4-0 humbling of Leek Town as the best half the Tulips have produced all season, is expecting a tough test at Stocksbridge on Saturday.

And, with the games coming thick and fast, he expects to utilise his squad over the next few weeks.

Leon Mettam returns from injury, while Neal Spafford is back from a ban and Jonny Lockie is available again.

“Leek were fragile on Saturday, but it was a tough fixture,” added the Tulips chief. “Stocksbridge will be as tough as that, too.

“We want to prove that we deserve to be where we are and going to Stocksbridge and winning would do that.

“If we can win that, then go on and beat Witton and Kidsgrove who knows where we might end up?

“It’s going to be a busy period, though, and I’d be foolish not to utilise my squad.

“The truth is, we can afford to drop a few points. I’m a realist, but there’s no shame in having ambition.”

Stocksbridge beat Belper Town 2-1 on Tuesday night and sit ninth in the table, 14 points behind Spalding.