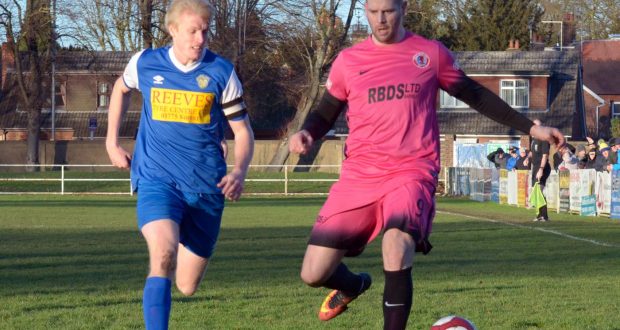 Bauress rifled home a fine 11th-minute finish at the Sir Halley Stewart Playing Field  to clinch a 1-0 victory for Albion, with Spalding paying the price for a poor first-half showing.

Chris Rawlinson’s Tulips were much-improved after the break and went close when skipper Nathan Stainfield slotted an effort wide from eight yards out, but the Cheshire side were value for the win.

However, Spalding remain in the box seat to clinch third place in the table with nine games remaining – and Rawlinson felt his team weren’t far off matching Witton, claiming a draw would have been the right result on the day.

“We were poor in the first half,” said Rawlinson “But we were much better in the second half and I thought we were the better team.

“For me, they won the first half and we won the second half – 1-1 probably would have been the fair result.

“If you break the game down, both sides had two big chances. They hit the bar and scored, we couldn’t manage a goal.

“What they did in the first half affected us. They were first to every second ball and they looked a bit sharper than us to be honest.

“Sadly, this is when the unavailability of one or two has probably caused us an issue. I thought we missed Nathan Whitehead, especially, in midfield.

“But I have full confidence in every player, I thought we were at least as good as – if not better – than Witton on the day.

“Don’t get me wrong, Witton are a good side. Their two centre forwards caused us plenty of issues, but I felt we dealt with them pretty well.

“The first half was the main negative. There was a bit of arguing creeping into our game in the first half, which I don’t like. Argue behind closed doors, not on the pitch.

“Both myself and Kev Ward were angry at half time. We had a particularly bad 20-minute spell when we weren’t ourselves and we let them know about it.

“To be fair – and credit to the boys – we were back to our old selves in the second half. We know we’re not a million miles away from Witton.

“The defeat hasn’t affected our play-off hopes too much, but It’s imperative that we get back to winning ways next weekend.”

Spalding, with Sam Downey replacing the unavailable Adam Jackson, flew out of the blocks early on and almost went ahead when a Cenk Acar cross narrowly eluded the head of top scorer Bradley Wells in the opening minute.

However, the hosts were very much on the back foot for the rest of the half.

After a few minutes of sustained pressure, dangerman Bauress angled a speculative low drive past the despairing dive of Michael Duggan to give Witton a deserved 1-0 lead on 11 minutes.

Clearly rattled, the Tulips were fortunate not to fall further behind minutes later when William Jones saw his stinging effort come back off the crossbar.

A great cross from Paul Williams was then fired into the side-netting by Robert Hopley at the back post, as Albion ended the first period with a spell of dominance.

After the break, Spalding produced a much-improved performance. Leon Mettam lashed a dangerous free kick well over the bar, while skipper Stainfield saw his header from a Lee Beeson corner saved by Calvin Hare.

Stainfield, however, was fortunate not to concede a penalty when his late tackle on Bauress – which looked to be well inside the box – was given as a free kick. Bauress, who was the best player on the pitch, was unable to continue after the challenge.

In the final ten minutes both teams had big chances to change the shape of the contest.

The first one fell to Spalding as Stainfield, up for a set piece, slid a close-range effort wide of the far post when well-placed.

Moments later Albion sub Prince Haywood race through on goal – but he also sent his effort wide of the far post.

The Tulips did have the ball in the net in added time, but Jonny Lockie took the ball out of play before delivering a cross for Kern Miller to head home.

Defeat doesn’t damage Spalding’s position in the race for the play-offs, but they’ll be hoping to bounce back from their fifth home loss of the season when Belper Town arrive at the Sir Halley next Saturday (3pm).