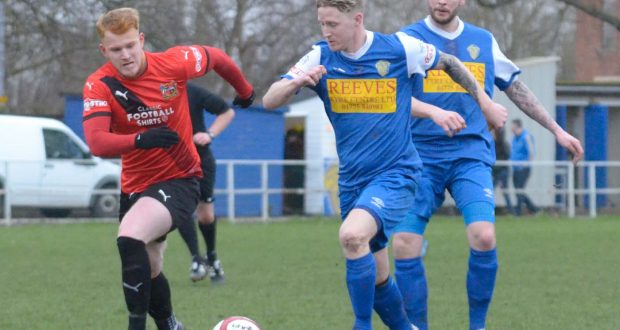 MISSING: Adam Jackson is unavailable for the visit of Witton. Photo by JAKE WHITELEY

Chris Rawlinson has challenged his Spalding United players to make the Sir Halley Stewart Playing Field a fortress as they bid to secure a play-off position in Evo-Stik NPL First Division South.

Starting with Saturday’s visit of second-placed Witton Albion (3pm), the Tulips have five of their ten remaining regular season matches on home soil.

The Spalding supremo reckons that picking up 15 home points would give them a great chance of finishing at least third – and would make any away results feel like “bonus points”.

After seeing Saturday’s trip to Witton rained off, this weekend’s clash will serve as the first meeting between the two promotion hopefuls this season.

Rawlinson has seen the Cheshire side on a few occasions this season and, although he’s appreciative of their talents, he does believe his Tulips have every chance of registering the first of those potential home wins.

“We’ll continue to take things one game at a time,” said the Spalding chief. “But we can target our home games for wins.

“If we can win all five, it will give us a tremendous chance of securing a favourable play-off position.

“It would also make any points we collect away from home feel like bonus points.

“Witton will be tough, but there’s no pressure on us. We’ve got a cushion to the sides below and they are the ones hunting the title.

“I’ve seen them a few times and am aware of their considerable quality. They’ve got attacking options in abundance – but we have great defenders and quality of our own up front.

“I certainly feel that we’re more than capable of giving them a very good game and we’re gunning for a win.

“The weekend off allowed a few of our lads to freshen up and shake off knocks. But I’m also acutely aware that the last time they had a weekend off, we turned up and produced a shocking performance at Carlton Town (lost 4-3).

“We’ll make sure they are put through their paces at training and I’m sure they’ll be ready for Saturday.”

Both miss Saturday’s showdown with Witton, as does the unavailable Adam Jackson.

Jordan Lemon or Paul Walker are expected to deputise at left back.

The Tulips go into the clash in third place, three points behind Witton (who have four games in hand) and 12 behind leaders Shaw Lane (two games in hand).

But Rawlinson’s side are ten points ahead of sixth-placed AFC Rushden and Diamonds (one game in hand) after Witton beat them 2-0 on Tuesday night – meaning they have a healthy cushion in the race to clinch a play-off position.

Meanwhile, Spalding’s trip to Leek Town has been rearranged for Saturday, March 25 (3pm).

The trip to Witton will now be played on Thursday, April 6 (7.45pm), while Basford United will now visit the Sir Halley on Tuesday, April 11 (7.45pm).

Spalding have also been handed a home draw in next season’s Lincolnshire FA Senior Cup.

They will host Grantham Town in the quarter-finals, with either Lincoln City or Gainsborough Trinity – bossed by former Tulips chief Dave Frecklington – awaiting in the last four.