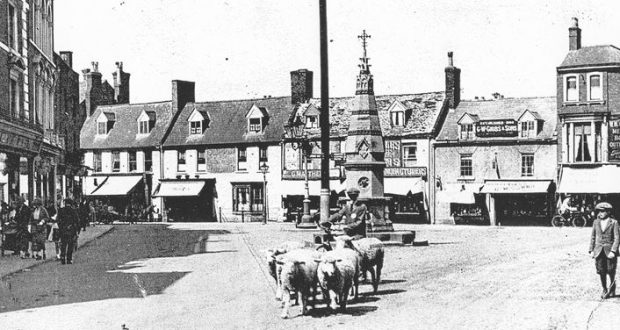 The Johnson Fountain while in the town centre.

‘Range of options’ over town fountain

‘A range of options’ are being looked at as to where to site Spalding’s historic drinking fountain, a meeting has heard.

It was introduced into Hall Place in 1874 as a bid by wealthy benefactor Mrs Johnson to provide the town’s people with fresh water, but was then moved to Ayscoughfee Gardens in 1956 and has been in storage since making way for the town’s war memorial.

There have been numerous calls for it to be reinstalled though attempts to put it back in the centre of town are complicated by land ownership.

A previous bid to include it in the now ongoing works to improve Spalding Cemetery were shelved after a public outcry.

Now South Holland District Council officers and councillors are looking at options in the town, a meeting of the Spalding Town Forum heard last week.

Coun Rodney Grocock, SHDC’s portfolio holder for assets and planning, has previously told The Voice that he’s determined to get the fountain reintroduced, but due to issues with its workings it’s likely to be as a monument rather than a working fountain.

In a statement to the forum, he said: “Instructed officers to consider a range of options for securing the long term future of the former drinking fountain.

“This work is being actively progressed. Officers are preparing a report for discussion at leaders’ and deputies’ meeting.

“This report will set out the history and the desire to see it permanently placed at both short and long term options.

“Mindful of the sensitivities surrounding the future location of the former drinking fountain, its intrinsic heritage value and its long association with the town, there is a need to ensure whichever decision is taken is the most appropriate.

“The ambition is to ensure we make the right decision and in order to follow due process this will necessarily take time.”

SHDC’s director of property and delivery Richard Hodgson added: “We’ll be consulting with a whole range of parties.

“Bear with us and we’ll go through the process and narrowing down the options we have at the moment.”

The Spalding and District Civic Society is among those campaigning to bring the fountain back into the town.

Its chair John Bland said: “We’ve made some initial enquiries with other towns where similar ventures have been undertaken.

“I’m hoping we can have some general engagement with the discussions along with other stakeholders.”