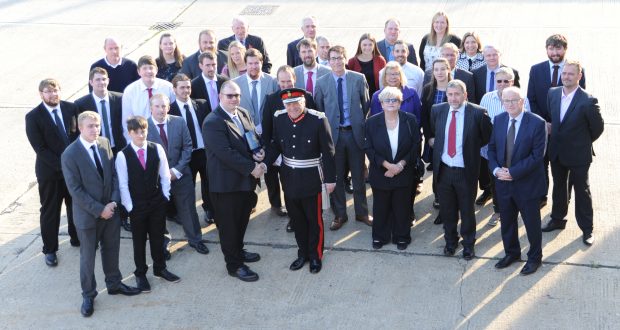 A rapidly expanding Spalding family firm has been given the royal blessing.

Welland Power has been presented with The Queen’s Award in the International Trade category.

It’s been earned because between 2014 and 2018, the UK generator manufacturer increased exports and turnover by around 600 per cent.

After employees attended a reception at Buckingham Palace earlier this year, the award was officially presented by the Queen’s representative in Lincolnshire, Lord Lieutenant Toby Dennis.

Welland will proudly be able to display the Queen’s Award logo for five years until 2023.

It’s the latest of many accolades for the company owned by the Farrow family who have been involved in engineering since the early 1910s with Welland Engineering Co starting in 1950.

Current managing director, Charlie Farrow, is Welland Power’s third generation from his family to have ran the business.

Charlie said: “Having the monarch’s approval is fantastic for Welland Power and everyone who works here.

“It’s a huge positive for us which shows how far we’ve come.

“It’s also a fantastic boost for us as we look to future projects and new business.”

Interested to learn more? – What is a diesel generator and how does it work?