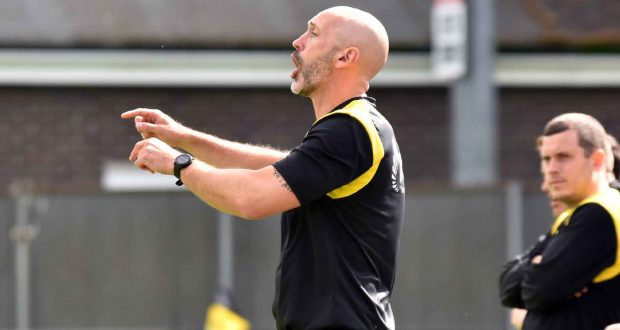 Danny Hussey felt that his Holbeach United were “a pleasure to watch” in the second half as they crushed Sleaford Town 7-0 on Saturday.

Hosts Sleaford had to endure 74 minutes with ten men after Ewan Armstrong was sent off for an elbow on Luke Wilson in the Uhlsport UCL Premier Division derby at Eslaforde Park.

The Tigers failed to break the deadlock in the first half, but goals from Josh Ford (2), Jonny Lockie (2), Liam Adams, Wilson and an own goal made it a demolition derby in the end.

Hussey admitted that he had sympathy with Sleaford’s plight, but was pleased to see his side show a ruthless edge after a sloppy first half.

“It was a good performance in the end,” said the Tigers boss. “I wasn’t overly happy at half time if I’m honest.

“We looked a bit predictable and they were able to go 4-4-1 after the red card – which was a dubious one in truth.

“We didn’t cause them enough problems, so at half time I told them what I wanted to do – get the ball wider, create spaces and attack – and they went out there and did exactly that.

“As soon as they first goal went in you could see that Sleaford were massively up against it and we were ruthless. It could have been double figures, really.

“It was a real pleasure to watch the lads play that way in the second half, I’m really happy with them.

“I have to say fair play to Sleaford, though. They never stopped playing despite being a man down and losing seven goals.

“They were really under the cosh, but the management kept motivating them and they really did themselves proud.”

The only minor negative was a minor ankle injury suffered by new signing Nick Jackson.