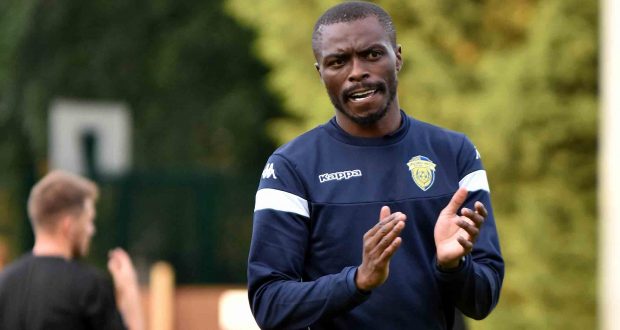 After a summer of exciting signings, it’s finally time for Spalding United to get their Pitching In NPL Midlands Division season under way on Saturday.

The Tulips welcome Loughborough Dynamo to the Sir Halley Stewart Playing Field for their league opener (3pm), before making the trip to Yaxley on Tuesday night (7.45pm).

Providing all players came through their eye-catching 3-2 friendly defeat to Peterborough United on Wednesday night – a game watched by Sir Alex Ferguson – boss Gaby Zakuani should have a full squad to pick from on Saturday.

That means star signing Marcus Maddison should feature alongside the likes of Nathan Stainfield, Gregg Smith and Jordan Macleod, who have all inked forms with the Tulips over the summer.

With such a buzz around the club, CEO Leigh Porter admits that the ambition is for Spalding to move up the non-league ladder under Zakuani’s charge.

He’s tempered expectations by saying their promotion target could take time, but has been buoyed by the progress that has been taking place both on and off the pitch since the club was taken over by Andrew Killingsworth in 2020.

“This is really our first season,” said Porter, who works closely with Zakuani. “Gaby has only really had one league game as manager.

“It all starts properly now. There’s a lot of excitement around the club given the recruitment we’ve managed to undertake over the summer.

“Gaby has worked very, very hard to not only work his contacts and sign somebody like Marcus Maddison, but also bring in other quality players for the level.

“Contrary to what people seem to think on social media, all of that has been achieved on a reasonable budget – certainly not the highest in the league!

“With that in mind, yes, we do have ambitions to see Spalding United in a higher division. But what I will say is that it takes time.

“Do we want promotion this season? Of course. But we have to look respectfully at our rivals and say that it’s a tough league this season.

“We as a club look very respectfully at the likes of Peterborough Sports and Stamford locally. We admire what they’ve done on and off the pitch and aspire for Spalding to be more like that moving forward.

“Off the pitch, our team of volunteers have vastly improved the club house and we’ve worked hard to improve what we can offer in terms of food and refreshments on match day.

“We’ve integrated the youth back into the club too, which can only be good news for the future. We fully expect to see players coming through and have the youth section more involved moving forward.”

Saturday’s opponents Loughborough are perennial rivals for Spalding and should provide a stern test on day one. They were second in the table last season before COVID-19 curtailed the campaign after less than ten rounds of fixtures.

Tuesday night’s game at Yaxley is something of a local derby for both sides, who last clashed in the league when Spalding were promoted from the UCL Premier Division as champions under Pat Rayment back in 2015.