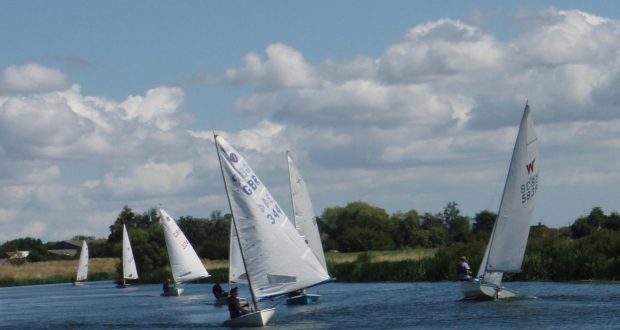 Prior has wind in his sails to land win

Andy Prior was back on top of the podium at Welland Yacht Club’s latest regatta.

Sunday saw the second regatta, The Flag Officer’s Cup, get underway in what is an unprecedented year.

Keeping with the pursuit race format for the start of the season, seven boats took part with four different start times.

The northerly wind provided a rare down river start for the 60 minute duration races.

First away at 9mins 50 were the Europes of Rosalyn Nickols and Brian Cobb.

They were followed by the OK of Andy Agar and the Wayfarer of Alan Cox and grandson Buddy Hunt a minute 40 later.

The Lasers of Andy Prior and Clive Herd were due to set off 10 minutes later and then finally the Supernova of Paul Burton a minute after them, however due to a mixup with their start time the Lasers actually got away last.

With only a short beat to the windward mark the order remained as they began the long run down the course.

Once around the lea mark the faster boats of Prior, Herd and Burton had started to make up some ground. As the fleet came back onto the clubhouse straight towards the end of the first lap Nickols had the lead from Cobb second with Prior having moved up into third from Burton fourth, Herd fifth, Agar sixth and Cox and Hunt seventh.

Once around the windward mark for the second time Prior and Burton had moved up to second and third respectively and closing in on leader Nickols with Cobb fourth, Herd now fifth from Agar sixth and Cox and Hunt still at the rear as they made their second run down to the lea mark.

With the lead boats approaching the windward mark for the third time Prior had the lead from Burton with Nickols third.

Nickols then got the best of a gust and all three boats were near level on rounding the mark, but the larger sails of Prior and Burton allowed them to pull away on the third run back down the course.

This also allowed Herd to move up to fourth and as the 60 minutes ended with the boats having just rounded the lea mark, Herd was within a boat’s length of third position.

Prior edged past Burton to take the win with Nickols third, Herd fourth, Agar fifth, Cobb sixth and Cox and Hunt seventh.

Following a short break the course for the second race was set longer as the wind had picked up from the previous race.

Again it saw a down river start this time no confusion and all boats got away on their allotted times.

The stronger breeze this time allowed Nickols and Cobb to pull out a decent lead on the first run down to bottom of the course (buoy 5).

As they completed their first lap Nickols still had the lead from Prior second, Burton third.

During the second run down the course Cobb decided to retire having slipped down to fifth.

The positions would remain constant for the remainder of the race with the lead boats having rounded the bottom mark for a second time as the 60 minutes came to an end.

Nickols claimed the race win but Prior’s second place gave him the overall win on the day.

Nickols was second overall thanks to her win, with Paul Burton third.

Anyone looking to find out more about sailing should contact the club via email secretary@wellandyachtclub.co.uk