Members of South Holland District Council drew praise from both sides of the political divide as they met for the final time of the current administration.

The Conservative and Independent groups agreed that councillors had gone about business during the past five years in a “generally courteous way”, which had enabled much good work to be achieved.

Council leader Gary Porter joked that he didn’t want to speak for long for fear of becoming emotional, but was keen to acknowledge the work and dedication of members and officers alike.
He thanked all councillors for working hard, trying their best and “taking the aggression” out of the role.

“The public will never thank you for it,” he told last week’s full council meeting.
“We’ve also been through the biggest recession and protected frontline services and all of you can be proud about your part in that.”

The leader said officers had performed very well to still achieve what they had despite numbers being “halved”. 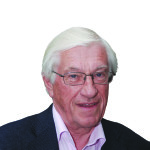 Coun Bryan Alcock, speaking on behalf of absent Independent group leader Coun Angela Newton, seconded the praise for officers and welcomed the way councillors had worked together “without the acrimonious ways which are often associated with councils”.

Coun Porter has been leader of the ruling Conservative group since 2003.
He said: “I have really enjoyed it, I can recommend it to anyone wanting to take over – although I won’t relinquish it easily!
“I kind of wish you well going into the election but I need to wish those people on my side better!
“I really do hope you have a good election campaign and hope you have an interesting and fun time, because it’s what we all got involved in it for.”

Earlier, he had paid tribute to Dennis Tennant (Long Sutton ward) and Amanda Puttick (Donington, Quadring and Gosberton), who both died during the past five-year term.
“I want to acknowledge the sterling service they gave for a number of years,” he said. “They were both fantastic councillors.”