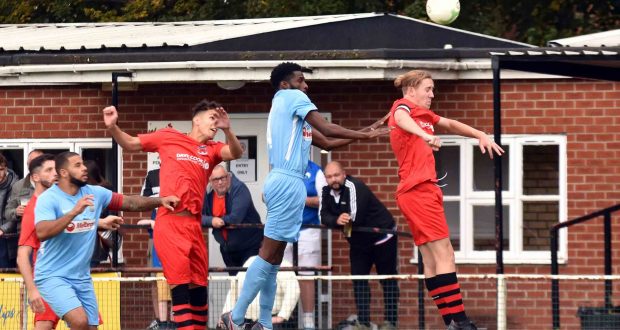 Lloyd Buckby (pens 25 and 76), Bayley Leslie (65) and George Wingrove (9) netted the goals as Wellingborough sentenced the Knights to a second successive defeat in the Uhlsport UCL Premier Division.

Skipper Dan Worthington did haul Pinchbeck level with a 44th-minute strike at the Dog and Duck, but they couldn’t mount a second-half fightback.

The loss, hot on the heels of a 6-0 home reverse to Rugby Town on the opening day, leaves the Knights bottom of the table at this early stage.

And, despite witnessing another sizeable defeat, was left happy with much of what he saw against a Doughboys side that are much-fancied.

“It was a much-improved performance,” said Tate. “I was critical of the showing against Rugby on the opening day, but this was much better.

“I think it was a fair result on the day, but perhaps the scoreline was a little harsh on us.

“The final goal was when we were chasing the game and obviously they scored two penalties, so we were a little unlucky.

“The biggest improvement was that we competed a lot more.

“The effort and attitude was right, which was very encouraging to see.

“We had a lot of new players in the squad and I was happy with them all.

“They seemed to settle nicely and it appeared they gelled well, which is great considering we’ve not had any time in training to integrate them as we’d like.

“Overall, it was much better and I’m encouraged by what I saw.”