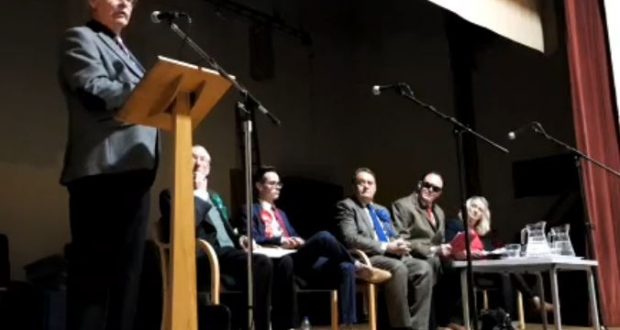 An image from the hustings in Spalding last month.

Police were asked to attend a General Election hustings last week and had to interve at one point amid concerns over an individual representing the Brexit Party.

A Community Support Officer was in attendance at last week’s questions for the candidates for the South Holland and the Deepings constituency at the Deepings School following disturbances at previous events.

A spokesman for Lincolnshire Police, said: “Our local PCSO from the Market Deeping and District Neighbourhood Policing Team attended at the election hustings arranged last evening held at the Deepings School Conference Centre.

“During the evening they had cause to speak to a member of the audience who left shortly afterwards.”

The event was organied by Churches Together and chaired by Ashley Baxter.

He told The Voice that the police were asked to attend due to issues at the recent Spalding hustings and at a Deepings hustings held in 2017.

He said: “Mr Jackson of the Brexit Party had disrupted a hustings in Spalding the week before as well as the Deepings hustings of 2017.

“It is his kind of intimidation that drives people away from sensible debate.

“It is a deliberate abuse of our British values of fair play and courtesy. “

Mr Jackson, whose question was one of those pre-selected to be answered by the candidates, told The Voice that he did not believe he was being abusive and had left early as scheduled due to child minding arrangements.

“Heckling is part and parcel of politics,” he said. “My heckling wasn’t being abusive.

“If the candidates think that’s abusive they shouldn’t be standing. It’s my democratic right to challenge them when I believe they’re lying.”

The Brexit Party are not contesting for the South Holland and the Deepings constituency.

Green Party candidate Martin Blake, said: “We live in an area where, by and large, differing views are respected.

“I understand that the police were asked to attend the hustings at the Deepings School because of the likely attendance of a Brexit agitator who completely disrupted the Deepings hustings in 2017, and who made some unwelcome remarks at the Spalding hustings on November 21.

“The police officers’ intervention was very discreet, for which I commend them, and the person concerned left quietly.

“The candidates in South Holland and the Deepings in this election have all conducted themselves in a responsible way, but we have to recognise that the tone of political debate generally has deteriorated since the 2016 referendum.

“In the current climate, we all have a responsibility to choose carefully the words we use.”

Liberal Democrat candidate Davina Kirby, said: “Hustings provide a democratic forum for members of the public to hear from candidates of all political parties in the run-up to an election, to debate policies and answer questions.

“This presumes that the public come with open hearts and will be able to actually hear from all the candidates.

“The organisers of the Deepings hustings did an excellent job to ensure that this democratic principle was followed.

“Unfortunately a few in the audience believed that the leave candidate couldn’t manage without their vocal intervention.

“Thankfully the stewards and local police dealt with the disruption promptly and effectively.”

Labour candidate Mark Popple said the heckling was primarily directed at himself and Davina Kirby while they were talking on immigration. “Once questions focussed on other pressing issues that were clearly of little concern to him he left the event not to return,” he said.

Independent candidate Rick Stringer was unable to attend the Deepings hustings due to work commitments.

He said: “I had half a mind to ring the police and ask the them to attend anyway thanks to the presence of an indiviudal who regularly shows up at these events. It was no surprise to me whatsoever that things turned out like they did.”

“There was no great accrimony from the political party representatives.

“In a democracy, it’s vital to have an opportunity to question candidates and credit to Churches Together for organising the event.

“I’m used to dealing with these kind of questions, interventions and chuntering as I’ve been an MP for a long time and it’s like that all the while in the House of Commons.”

A video broadcast live from the Spalding hustings is available on the Spalding and South Holland Voice’s Facebook page.