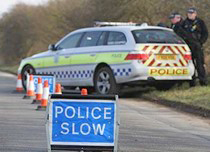 Lincolnshire Police are investigating after a man was seriously injured when his quad bike fell into a ditch.

The incident happened in the Red Cow Drove area at Moulton March between 6pm and 6.30pm on Saturday, July 20.

Police say the rider, who is in his 20s, “received serious but non-life threatening injuries” as a result of the incident.

They’re now looking for witnesses and anyone in the area who may have dashcam footage of the vehicle just before the incident occurred.

A spokesman for Lincolnshire Police, said: “We are appealing for anyone who was in the area, with or without dashcam footage, and saw the Quad to contact us.”

You can contact the police quoting reference 345 of July 29