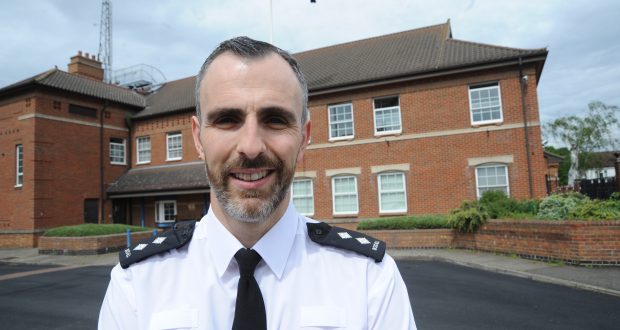 Spalding’s top police officer has backed CCTV use after claims some authorities in the district are considering pulling funding its use.

Inspector Gareth Boxall insisted using cameras was effective after receiving a grilling from local councillors about policing in South Holland at a meeting last week.

He was asked to appear before South Holland District Council’s Performance Monitoring Panel after its members had expressed concerns that parish councils were seeing a lack of police presence in their areas.

Coun Bryan Alcock, the chair of the panel and a Crowland parish councillor, said: “When this authority (the district council) and the parish councils decided they would fund CCTV, one of the requirements was that statistical evidence was fed back to the authority to justify the expenditure and it’s been extraordinarily difficult to get that information.

“In fact, for long periods, it’s just not been produced.

“I don’t believe there’s been a consistent feeding back of the information since it was installed.

“One or two parish councils that one talks to are getting to the stage where they may say there’s no proof it’s doing any good so we might just drop out.

“I think I’ve only ever heard of one prosecution that can be directly attributed to the use of CCTV.

“There’s a number of people becoming very unhappy there’s no evidence to the link that your successful work with the fact CCTV is there.”

Coun Jane King, who is also on Donington Parish Council, told the meeting

“We’ve got CCTV cameras in our local park which is targeted by vandals.

“We had the ram raid where the ATM was removed from the local Co-op near where the parish council has its own CCTV but it wasn’t looked at once by the police.

“Because it is costing parish council money to have these cameras, we are beginning to think why bother if nothing’s done?”

Inspector Boxall said he would “absolutely not” be in favour of authorities cutting CCTV coverage.

He said: “CCTV is a tool to help us reduce crime and detect crime when it occurs. In my mind it is effective.”

When asked if CCTV just moves crime elsewhere, he added: “I’ve not seen any evidence that it’s moved crime to areas where there’s no CCTV.

“There’s two ways in which we benefit from CCTV. One is the operator saying this is happening now can you go to it.

“If a CCTV operator sees someone on the floor being kicked and beaten the officers will drop what they’re doing to go to that because it’s a priority.

“If they see a group of youths perhaps hanging around where they shouldn’t, possibly blocking a footpath, that wouldn’t get the same priority, not to say we wouldn’t send anybody. It would depend on what’s happening at one time.

“The biggest way CCTV is used is probably after a crime has happened and we can use the CCTV to capture what’s happened, whose done that crime.

“The benefit of CCTV falls on a wider area too so if a crime has happened just outside the area of CCTV coverage, people could have walked or driven past the cameras.

“CCTV gets used on a regular basis to try and identify those responsible.”

Inspector Boxall told the meeting that he currently has 40 per cent less PCSOs than previously which has led to them being unable to attend parish council meetings, something councillors had also express disappointment with.

He said: “Behind this are people, not magical people, just normal people who wear a blue uniform and also implementing other changes at the same time.
“I hear the concerns but bear with us we’re trying to find the methods that work to keep in touch.
“There’s some PCSOs that have got six or seven parish councils.”