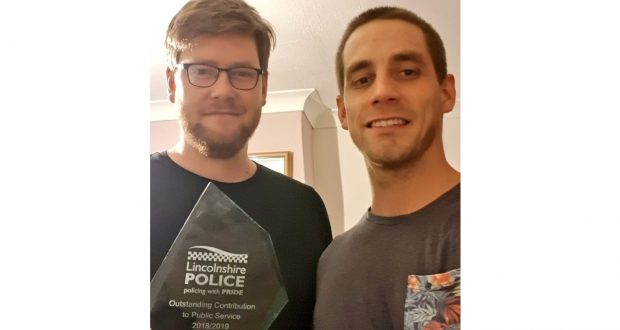 Luke and Ryan Hart with their award.

Two brothers who have campaigned to speak out about domestic violence after their father murdered their mother and sister in Spalding have been given a public service award.

Luke and Ryan Hart were recognised by Lincolnshire Police at a ceremony in Lincoln.

A police spokesman said: “Since [their] heart-breaking experience, Luke and Ryan have demonstrated an outstanding ability and commitment to speaking out about domestic violence and abuse.

“They have worked tirelessly to raise the profile of controlling and coercive behaviour.

“Both Luke and Ryan were pivotal voices in the Domestic Homicide Review that followed, and faced the local media on its publication on November 29, 2018.”

Chief Constable Bill Skelly addressed the awards ceremony, and said: “The citations demonstrate the profound commitment to public service shown by the officers, staff and volunteers of Lincolnshire Police, as well as members of the public.

“That commitment and support tell us everything about what it means to belong to this great organisation – it demonstrates the special quality of policing in this county and it makes me feel incredibly proud and privileged to be your Chief Constable.”