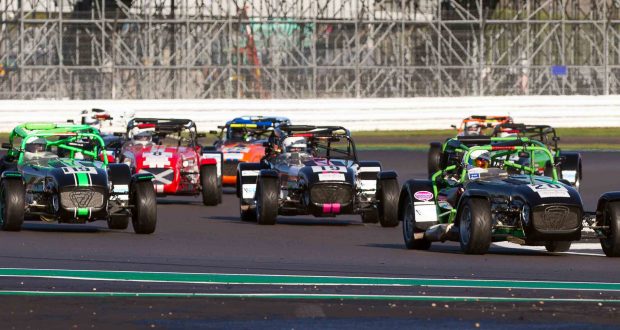 Andy Molsom is looking forward to next season after finishing 2020 by achieving something he’s been working towards for three years.

The Caterham Graduates Racing Club held its finale at Silverstone recently and it saw the racer earn his first podium in the Sigmax class.

After a productive testing session in a bid to improve understeer issues, qualifying on Saturday afternoon was a learning curve with the new set up, and lack of any slip streaming down the straights meant starting 11th, 11th and eighth on the road on a grid of 45 cars.

Going against normal advice, Molsom changed the roll bars to stiffen the car before the races and with nothing to lose, he used the races as a further test session.

Race one was on a damp but drying track, which Molsom revealed in and he moved up to sixth in class.

The track had dried by race two which saw Molsom start 11th.

He lifted to avoid being squeezed into the first corner, dropping a place but then pushed and made progress moving up to fifth on lap nine, and was battling hard for a number of laps until a safety car period.

At the restart, Molsom capitalized to move from 7th up to third in class, which he held onto until the chequered flag.

Molsom commented: “This is my first podium in the Sigmax class, and it marks three years to get there.

“There have been times I’ve nearly given up with the car, but we started afresh with CTS Motorsport based in Gainsborough this year.

“We continued to learn about the car and it shows what can be achieved with determination and persistence.”

Race three later in the afternoon was also dry, and a great start again for Molsom saw him fourth in class by the end of the first lap, a position he maintained until lap 16 while constantly battling with a faster class car.

Braking too late into Farm though meant he went wide allowing three cars through.

He battled hard for the last few laps, eventually finishing sixth in class.

“What a great way to finish the season,” Molsom said. “Not only have we got the car where I want it, with some tweaks that we can still do, but to come away with a podium was great.”

Molsom intends to return to racing in Sigmax class of the Caterham Graduates Racing Club in 2021, which provisionally begins on April 17 at Oulton Park.