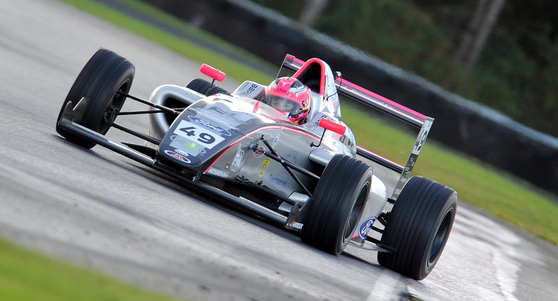 Race ace Abbi Pulling completed her first season in the F4 British Championship with a podium at Brands Hatch as she clinched sixth place overall – and a coveted award to boot.

The Gosberton teenager placed fourth, seventh and third in the three races at the final round of the series, but the best was still to come as she was given the JTR Memorial Award.

Given to the driver deemed to have made the biggest impression on the championship over the campaign, it’s a ringing endorsement of Pulling’s obvious talent.

A brief statement from British F4 said: “We’re delighted to announce Abbi Pulling Racing is this year’s recipient of the JTR Award. A fantastic debut season in single-seaters, and richly-deserved.”

The South Holland speedster, who admitted that it was “an honour” to claim the accolade, was again in eye-catching form at Brands Hatch.

The JHR Developments racer qualified seventh for races one and three, but was just 0.449secs and 0.503secs behind pole-sitter Luke Browning in the respective standings.

An impressive opening race from the JHR star saw her gain three places to take fourth in race one, some 15.151secs behind winner Browning.

With the reverse grid in effect for race two, Pulling was forced to settle for seventh as Alex Connor claimed top spot.

But Pulling saved her best showing of the weekend for last as she claimed third position in the finale after a heavy rain caused the race to be red flagged at half-distance.

Zak O’Sullivan won the race, but Browning was declared champion despite finishing down in tenth.

For Pulling, her first season in single-seat racing ends with a healthy haul of 178 points in sixth place overall.

That’s some 216 points shy of Browning, but she wasn’t far off fourth and is certain to improve next season.