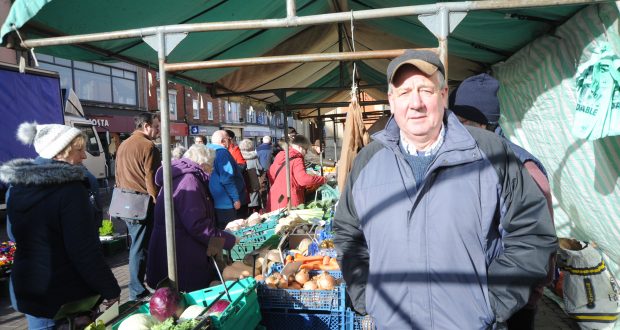 Plans to increase what it costs to have a table at one of South Holland’s markets are to be shelved just hours after being given the backing of top councillors.

As part of a number of increases in the fees and charges for its services, South Holland District Council was looking to increase the cost for a table at Spalding, Long Sutton, Holbeach and Crowland markets up by a last June Retail Price Index (RPI) figure of 2.9 per cent.

The council’s Cabinet passed all of the increases, including the market charge, at its meeting yesterday morning (Tuesday).

But today, (Wednesday) the authority issued a statement saying the market traders will not be charged more.

The other proposed increases, including for those South Holland Centre users and the cost of the green waste bin, will still go ahead subject to approval from the Full Council.

Councillor Roger Gambba-Jones, South Holland District Council Portfolio Holder for Place, said: “The proposal to make a modest increase in the charge for market stall rental has been given some further consideration, and it has been decided to retain the charges at their current level at this time.

“This will enable key stakeholders to work together as part of the new Town Centre Improvement Plan to consider the future of rental charges as part of a review to be carried out with NABMA, the National Association of British Markets.”

David Burgess, the chair of the Spalding Market Traders, welcomed the move.

“That’s great.” he said when The Voice told him of the council’s statement this lunchtime. “I’m pleased that they’ve been listening to us and I’m looking forward to meeting up with them and discussing the way forward.”

In an article in this week’s issue of The Voice that was published before the announcement, market traders told us they’d worked it out it would cost them £105 per table extra per year with many having more than one table.

The Spicemarket stall has been on Spalding Market for 33 years, but after three years running it, Craig Lyons says he was already considering closing it before the price rise.

He told The Voice his stall had already been reduced from three tables to two and the new costs would cost him an extra £210 a year.

“Customers I’ve spoke to about it say they’re disgusted,” he said. “The town centre is just going to die without the market.

“It’s quite upsetting and we don’t seem to get much for the money we put in.

“There must be six or eight fewer traders coming to the market regularly than there were around a year ago.

“We’ve lost a butchers and once you lose those kind of stalls and fruit and veg stalls you’re struggling.”

Barbara Rennison had said she wasn’t happy about the rise and had recently given up her job to concentrate on the card store she’d previously organised for three years.

“We do not get any help and facilities like the Sheep Market toilets haven’t been open for months which isn’t good for us when we’re working outside all day.

“I do love the job though. It’s great being outside and seeing so many people.”

A particular issue with the market traders we spoke to in Spalding is that they say three years ago they agreed to set their own tarpaulins but feel proposed council cutbacks to improve the cost of hosting the market were not met.

“I understand what the council are doing as it’s a long while since we had an increase,” said Michael Booth, whose fruit and veg stall has been running for 33 years. “I’m for and against it.

“But the council told us about three years ago if we got our own sheets then they would make cut backs, but they still haven’t done what they promised.

“We kept our side of the bargain but they didn’t keep theirs.”

Julie Newman’s hot food stall has been on the market for ten years and she’s part of the National Market Traders Federation.

She pays by square foot taken rather than table, so has to pay for the entire space taken by her trailer and she was “very disappointed” with the proposed rise.

“They said they would meet our shortfall a few years ago by taking one person off the markets but nothing’s happened.

“We’d also like more signs in the town telling people when and where there’s a market, there’s nothing at all.”

Portfolio holder for finance, Coun Peter Coupland told Tuesday’s Cabinet meeting that all the rises were to cover costs.

As reported last week, they include raising the cost of garden waste bins, South Holland Centre tickets and what it charges for housing stray dogs.

He said: “A whole list have been reviewed and it’s been quite a job for the finance team.

“Fees and charges are an important source of revenue for the council and play an essential role in maintaining good service delivery for users and ensure services remain viable.

“We do not set out to make a surplus on these charges.

“Our intention is that users of the service pay the fee that intends to cut the cost of those services. The total income from the fees and charges is £2.32m down on previous years due to lower income from planning.”