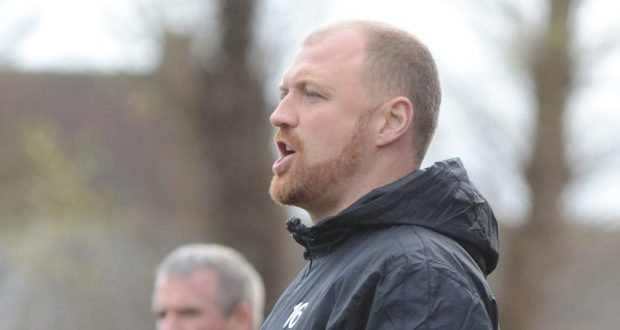 Pinchbeck United slipped to another defeat on Tuesday night as Wellingborough Town handed them a 2-0 reverse.

The Knights, who are now rock bottom of the Uhlsport UCL Premier Division, conceded goals in each half at a very windy and cold Dog and Duck.

Sean McBride (38) gave the Doughboys a 1-0 half-time lead, before Ryan Lovell’s 74th-minute effort clinched the points for the home side.

The Knights did have their chances in what was a largely poor game, with Corey Kingston twice fashioning reasonable openings in the first half and Pat Kacirek rifling a respectable opening just over the bar.

But Ian Dunn’s side are two points adrift at the foot of the table and currently occupy the sole relegation place, something the player/boss is very aware of.

“We’ve known we’re in a relegation scrap for a while now,” said Dunn. “There’s no getting away from it.

“I won’t lie, it’s a new experience for me as a manager – we’ve been fortunate enough to have a lot of success here over recent years.

“We’re not a million miles away from getting results, but I think we need a bit more experience in this squad.”

Next up for Pinchbeck is the daunting task of visiting title favourites Shepshed Dynamo on Saturday (3pm).

Dunn admits that his side will do their best to frustrate the boys from Butthole Lane – and feels they’ll at least be able to compete.

He added: “It doesn’t get much tougher than Shepshed away.

“We know what kind of game it’ll be and we’ll do our best to frustrate them.

“They have pace to burn and will create a lot of chances.

“But we’re often in games and will have to try and take our chances when they arrive.”