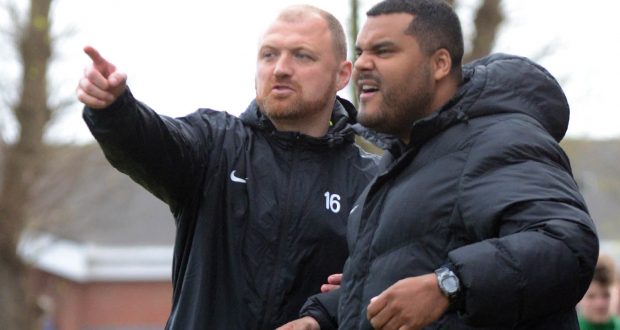 Ian Dunn feels that Pinchbeck United need to pick up three points at Peterborough Northern Star on Saturday (3pm) if they want to finish in the top four of the Future Lions UCL Premier Division this season.

The Knights make the trip to the Branch Bros Stadium in a healthy fourth position, some ten points off second place.

In what is their first-ever season in the UCL’s top flight, player/boss Dunn wants his side to finish as high as they possibly can.

The trip to Star is the first of two fixtures between the sides in the coming weeks, with a Hinchingbrooke Cup semi-final to follow on February 26. Pinchbeck won the reverse at the Sir Halley Stewart Playing Field 2-0 back in December – but Dunn feels the city side have improved since then.

He said: “They gave it a go late on in the last game, but I felt we were pretty comfortable winners.

“They’ve had a good spell recently, though, so we can’t take them lightly.

“They got a good draw at Rugby and have done well, so it’ll be a different game for us.

“I get a bit of stick for using clichés, but I still back my side to beat anyone if they perform on the day. If we want to finish in that top four, we need to be winning games like this.

“There has been a bit of disruption with games being postponed, so you just hope that the lads have used the break to shake off a few niggles are that we’re good to go.”

Pinchbeck have lost the services of on-loan frontman Ollie Shackleton, but Harry Limb, Nick Jackson and Tyler Wright should return.

They have also snapped up former Boston United midfielder Harry Vince, who has been out of the game for a while due to a knee injury picked while at Matlock Town.

Vince, a former England C international, has been training with the Knights for a few weeks.

Dunn added: “We’re helping him regain his match fitness and he’s helping us out by playing some games.

“We’ll have to build him up gradually but he’ll be a good acquisition and we’ll see where it goes.”