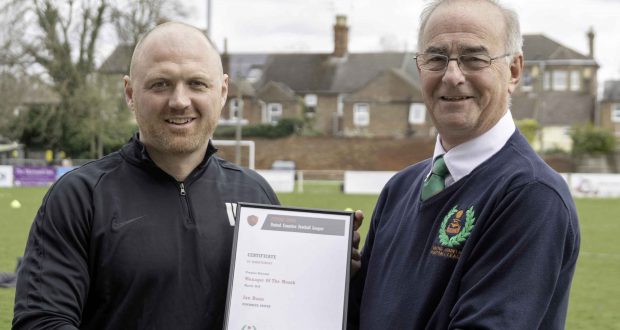 Pinchbeck United player/boss Ian Dunn reckons that his side have a fight on their hands if they are to achieve their goal of finishing in the top four of the Future Lions UCL Premier Division.

This Saturday sees Dunn’s charges make the tricky trip to mid-table Leicester Nirvana (3pm), as they bid to tighten their grip on fourth.

That would represent an excellent first season at Step Five for the UCL Division One champions – and the player/boss admits that his side haven’t been far away from faring even better.

“Cogenhoe are really pushing us now,” said the league’s manager of the month for March. “We’ve got to make sure that we get back on form again.

“For a while people have been talking about either us or Holbeach United getting fourth – but if we’re not careful, Cogenhoe will take it.

“It won’t be easy for us at Nirvana on Saturday.

“They may have been inconsistent this season, but they’ve been much better at home.

“If we could have drawn against Pagnell last time out it would have been a decent result.

“Losing has put a bit of pressure on us. We’ve been unchanged for the past two games, so maybe it’s time I shuffled the pack a little and look at the system.

“We’ve got a cup final to look forward to and the lads need to step things up a little. We’ve not been creating enough lately and that’s been our problem.

“If we had been a bit more ruthless this season and turned draws into wins, it’s scary how much higher we could have been.”