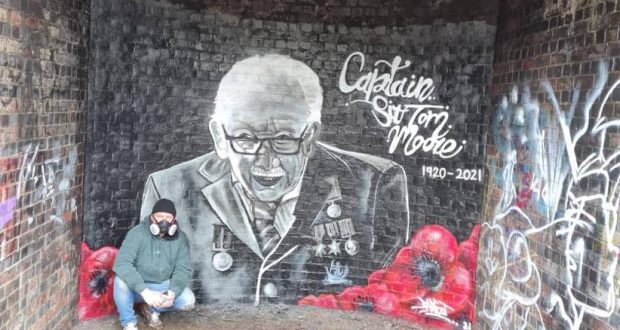 Karl Barfoot with his image of Captain Sir Tom Moore.

The possibility of creating a wall for street artists in Spalding is due to be discussed this week.

A petition with more than 800 signatures has been presented to South Holland District Council in a bid to create the new facility.
The move was started by Karl Barfoot and Adam Sadd who have created popular murals in Spalding.
“Many from around the area have commented on social media, after seeing some local work and talent, that it would be a nice attraction for the town to have a legal street art wall,” says the petition.
“Peterborough has one and it has been a huge attraction for the city with people coming from all over the country to visit the artwork.
“Having something like this in Spalding will attract many big named street artists to come and paint here, and also be an attraction for the town.”
The council’s own petition scheme states that once more than 850 people have signed, it will be debated by the full council.
Karl will be given five minutes to speak at the meeting today (Wednesday) and outline the idea and the proposal will be discussed for up to 30 minutes by members or longer if the chairman decides to allow it.
“Schools can also use an area or wall to do art projects and the local community could put on workshops to teach the younger generation about the street art culture, to respect the artwork and to teach them how to do it,” said Karl.