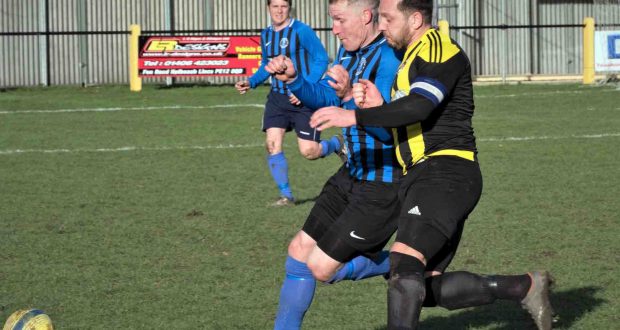 Crowland Town climbed to the top of ChromaSport PDFL Division One on Saturday with a resounding 7-0 derby win over struggling Spalding Town.

Danny Firth and Corban Oldham both helped themselves to doubles in the Snowden Field romp, while Reece Crane, Harry Grigas and Harry Grigas also got in on the act.

It’s now an impressive ten wins from 13 games for Crowland, who are three points clear and gunning for a return to the top tier.

Also on winning form in Division One were Moulton Harrox Reserves, who handed Premiair a 3-0 reverse at Broad Lane.

Danny Lambe-Hyner (2) and Jack Smith grabbed the goals in that one.

Up in the Premier DIvision, Holbeach United Reserves enjoyed a day to remember as they thrashed Leverington Sports 7-0.

In Division Two, a Ryan Brothwell effort was all Long Sutton Reserves needed to see off Netherton United Reserves 1-0 at London Road.

The Magpies were aided by a red card to Patryck Huczko as they moved into the top five.

Meanwhile, Division Three side Tydd Reserves crashed out of the League Cup 4-3 at The Limetree.

Dan Woods grabbed two of the goals for the home side, who are mid-table in the division below.

There was a derby down in Division Five, with Long Sutton Athletic A getting the better of hosts Spalding Town Reserves.

Three of the four Sutton goals came from substitutes at Knight Street, with Jack Greenacre, Joe Harrison and Kian Penn jumping off the bench to find the net.

The scoring was completed by Mark Greenacre, as Sutton went fourth in the table.