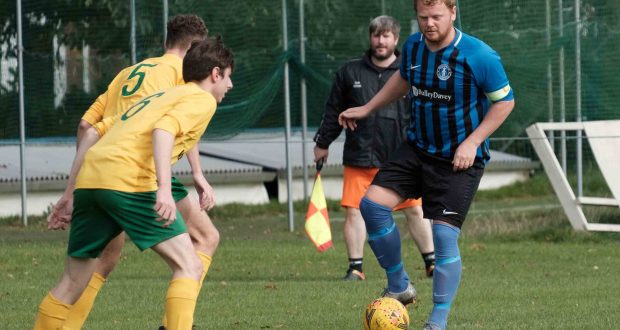 ON TARGET: Billy King was one of Moulton's scorers on Saturday. Photo by KEN SMITH

Moulton Harrox bounced back from successive defeats to defeat Oakham United 3-1 in the ChromaSport PDFL Premier Division on Saturday.

The defending champions were inspired by a Declan Earth double at Broad Lane, while Billy King got their other goal.

The only sour note for Kev Nottingham’s side was a red card to midfielder Louis Steadman on his return to the team.

Harrox also handed a start to Matt Cawthorn, the former Long Sutton Athletic striker who had been playing at FC Parson Drove.

Meanwhile, Tydd endured a miserable day at Netherton United as they slumped to a humbling 12-0 defeat.

Also in the top tier, Holbeach United Reserves were edged out 3-2 at Thorney despite goals from Tom Coote and Callum Simmonds.

Matt Eaton (2) and Callum Madigan netted for the Magpies, who have been drawn at Moulton Harrox in the next round on November 2.

Division One high-fliers Crowland Town have also progressed to the next round of the Lincs Junior Cup after seeing off Ruskington Rovers 3-1.

Ethan Allen, Lee Jackson and Ash Pratt netted for Crowland to set up a home time with Barnetby United.

Back in Division One, Moulton Harrox Reserves were dealt a 7-2 defeat at Stilton United. Ashley Wilson’s strike and an own goal were Moulton’s only consolation.

There was also a 3-0 defeat for Spalding Town at FC Peterborough, which keeps them bottom of the table.

In Division Three, Holbeach United Sports made it six wins from six to stay top of the table.

Also on winning form were Tydd Reserves, who defeated hosts Whittlesey Athletic A 1-0 thanks to Nick Ainslie’s goal.

Down in Division Four, it was another tough day for basement side Holbeach Bank as they lost 8-0 at Peterborough City.