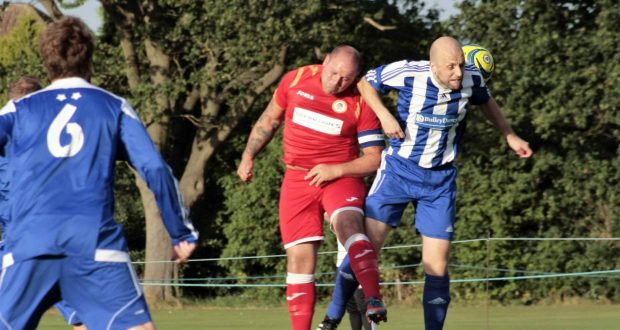 Having been thrashed 9-1 by Moulton Harrox on the previous Tuesday, a double from Tom Gosling and a further effort from James Ward earned Omar Joof’s side their third league win of the season.

The win leaves Holbeach 11th in the table after seven games.

Down in Division One, Moulton Harrox Reserves crashed out of the Chairman Championship Shield with a 5-1 loss at Peterborough Wittering Harriers.

Sub Josh McGuire got the consolation for Kev Nottingham’s charges.

Doubles from James Woods and sub Dale Parnell, plus efforts from Paul Newcombe and Nick Ainslie, did the business for the Saints at Memorial Park.

The big win puts Tydd top of the embryonic standings with two victories from as many matches – and a goal difference of eight.

However, no other South Holland side tasted victory at this level.

Spalding Town were held to a battling 0-0 draw at Netherton United A to stay unbeaten so far this season.

They picked up their first point under new boss Dom Mason by drawing 1-1 at home with AFC Stanground Sports Reserves, Tom Pickering bagging the goal.

Crowland Town Reserves slipped to a 2-0 home loss against Stamford Lions Reserves at Snowden Field and drop to eighth in the table.

Down in Division Four, Whaplode Drove roared to a 5-2 success over Peterborough Wittering Harriers Reserves at Parsons Lane.

They spread the goals out, with Michael French, Lee Jackson, David Jenkins, Joe Strickland and Calum Slater all on the mark.

Tydd St Mary Reserves are still looking for their maiden win of the campaign after slumping 3-0 at Parkside.

There was better news for Long Sutton Athletic Reserves, who earned their first success of the season by beating hosts AFC Stanground Sports 3-0.

Shane Miller helped himself to a double for the Magpies’ second string, with Mark Williams their other scorer.