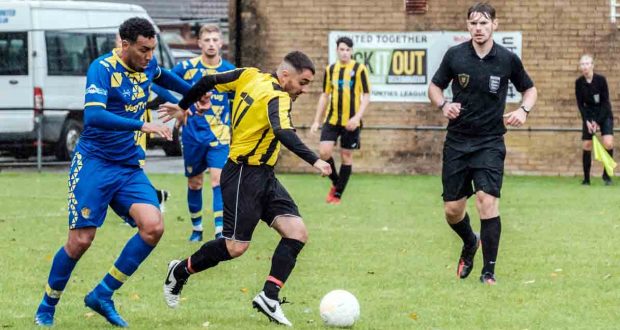 ON THE MARK: Tom Coote netted for Holbeach Reserves. Photo by KEN SMITH

Jordan Keeble and Fenn Storey both bagged doubles at Carter’s Park, while Josh Balding and Tom Coote also got in on the act. The Tigers sit fourth after six games, six points behind flawless leaders Stilton United.

Staying in the top flight, fellow top tier side Long Sutton Athletic picked up a 4-2 win over Keelby United in the Lincs Junior Cup.

Jake Clitheroe, who is staying with the Magpies after turning down a move to Holbeach United, was joined on the scoresheet by Matt Eaton and Jake Lally at London Road.

In Division One, Pinchbeck United Reserves produced the performance of the day as they romped to a 5-0 win over FC Peterborough.

Tydd also impressed as they picked up their first victory of the season.
Goals from Jordan Clow, Ryan Ingle and Timmy Magnus secured a 3-0 home triumph over Thorpe Wood Rangers.

Also beaten soundly were Moulton Harrox Reserves, who were handed a 3-1 home reverse by Eunice Huntingdon.

John Ball got their goal at Broad Lane.

In Division Two, a hat-trick from Jack Greenacre and two goals from Brandon England steered Long Sutton Reserves to a fine 5-2 win at Wittering Premiair Reserves.

Tydd Reserves lost 8-0 at Cardea Reserves in Division Three, however.

Holbeach Bank went down 5-3 at Ramsey Reserves despite Dan Whitehouse (2) and Scott Walker finding the net.