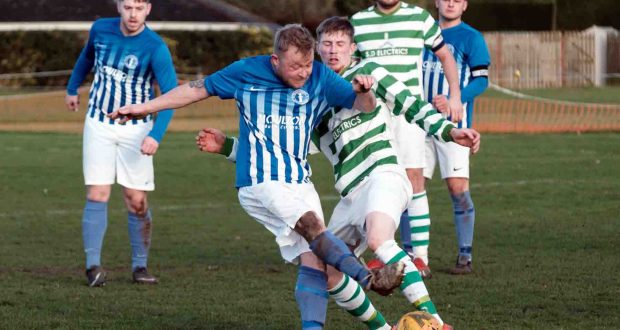 PDFL round-up: Dec at the double to keep Moulton Harrox in the title mix

Moulton Harrox remain in the hunt for the ChromaSport PDFL Premier Division title after a 4-1 win at Peterborough Polonia on Saturday.

A double from Dec Earth, Louis Steadman’s strike and an own goal leave Harrox just one point behind leaders Peterborough North End Sports.

Holbeach United Reserves went one better as they thrashed hosts Ketton 5-0, with Tommy Coote (2), Jordan Keeble (2) and Will Barnes all bagging.

However, Long Sutton lost 4-0 at home to Leverington Sports and Tydd went down 3-2 at Oakham United despite goals from Jason Bradshaw and Ryan Mills.

In DIvision One, Crowland Town are three points clear at the top following their 4-1 win at Oundle Town. Corban Oldham (2), Danny Firth and Peter Fox got the goals.

But there were defeats for Moulton Harrox Reserves and Spalding Town, who went down at home against Eye United (0-2) and FC Peterborough (0-1) respectively.

Meanwhile, Holbeach United Sports continue to shine in Division Three. A hat-trick from young striker James Clark and Josh Ling’s strike gave them a 4-1 win over Glinton and Northborough.

Down in Division Four, it’s 16 losses from 16 for Holbeach Bank as they were beaten 6-0 at Limetree.